Appearance of the Tufted Titmouse 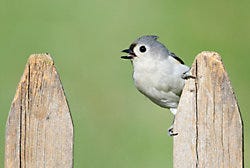 Male and female Tufted Titmice are identical in plumage – a black patch above the beak, a gray back, rusty flanks and a dull white breast. Their large eyes are surrounded by a white ring that reaches to their beak.

The most telling part of the Tufted Titmouse is its namesake – the pointed tuft of feathers that juts from the back of the bird’s head. This tuft gives them a cheery appearance and makes them a welcome sight at any feeder.

As a chickadee-like bird, a Tufted Titmouse is relatively small – rarely measuring more than 6 inches long. It has a thick neck, which gives it a squashed appearance and adds to their general cuteness.

Most Tufted Titmice live to be a little more than 2 years old, though some as old as 13 years have been recorded.

Geography of the Tufted Titmouse

To the delight of bird feeding enthusiasts, the range of the Tufted Titmouse has grown over time. When they were originally studied, they only resided in the Ohio and Mississippi river basins. Since the middle of the 20th century, these birds have expanded that range along the Eastern Seaboard. Their range continues to grow: More and more Tufted Titmice are being recorded in southern Ontario and other northern latitudes.

Tufted Titmice are generally considered to be a non-migratory species, but individual birds and regularly move up to 125 miles as they search for food and new territory.

Local Environments of the Tufted Titmouse

Tufted Titmice seem to love water, preferring deciduous woodlands near swamps, moist flood plains and river basins. They have also grown accustomed to suburban life, taking up the habitats provided by parks and other wooded residential and suburban areas.

This titmouse is also among the first to respond to predator warnings from other birds, often grouping with other birds to observe and mob the potential troublemaker. You have to love a bird that stands up to bullies!