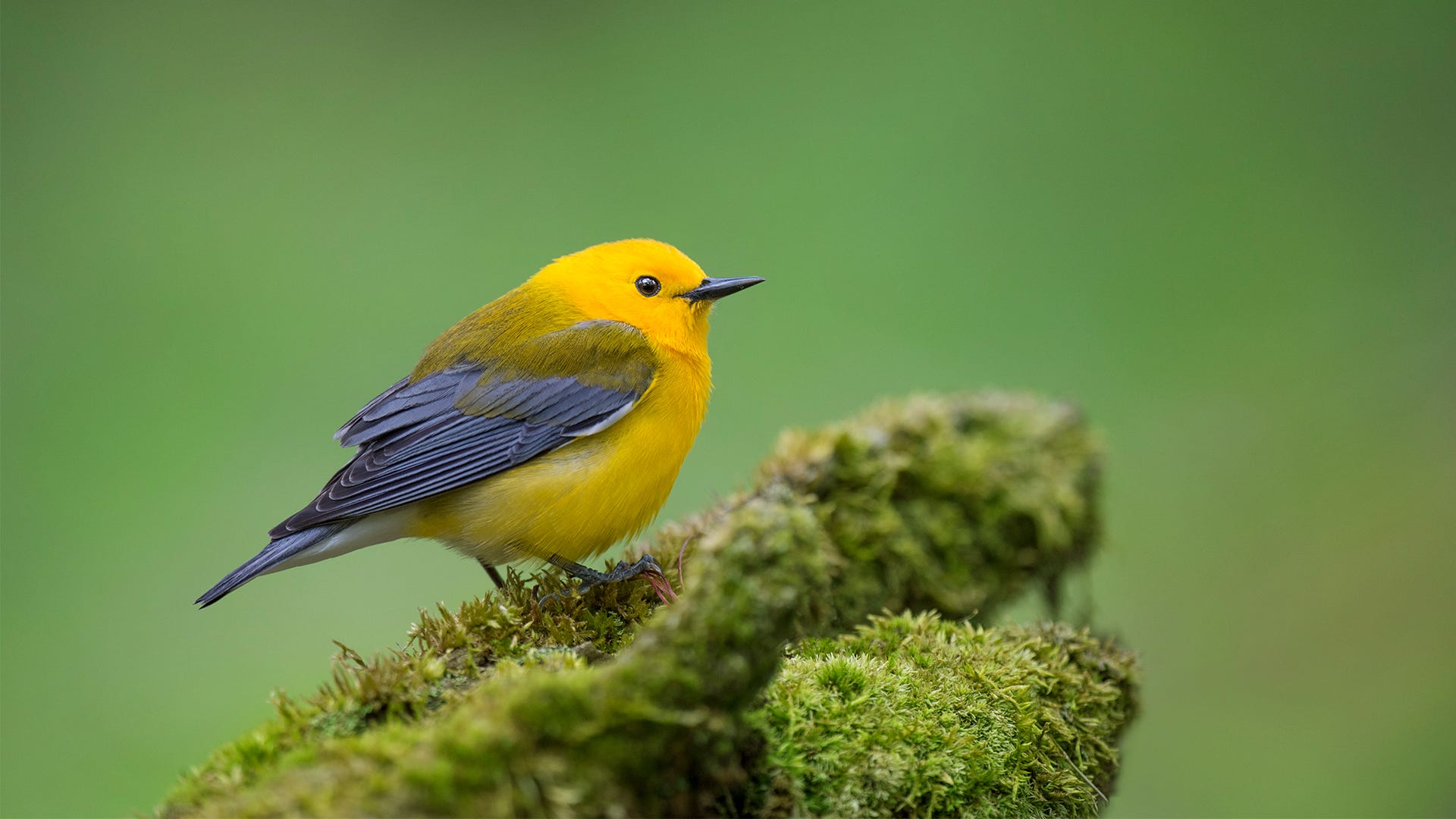 As the Spring sun begins to warm woods and fields and backyards, it’s time to focus on a bird that brings music to our ears. The Prothonotary Warbler, or Golden Swamp Warbler, is a unique songbird of the New World warbler family. “Prothonotary” refers to an order of Catholic clerics who wore bright yellow hoods. This small, gorgeous bird is on the Audubon’s priority list. Besides Lucy’s Warbler, it is the only cavity-nesting warbler, and it is the only member of the genus Protonotaria. The Audubon Society is giving priority to the Prothonotary because its habitat is in decline. In Canada it is endangered. Each Spring, starting in mid-March, the attentive and lucky birder can spot it as it migrates up, first touching down along the Gulf Coast and finding its way north in April and May. 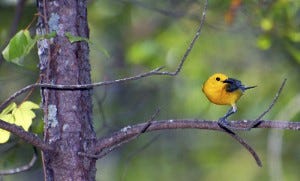 Conservationists and enthusiasts can help the Prothonotary Warbler by putting up nest boxes before breeding season in their backyard or near water. The Prothonotary Warbler nests in small cavities near swamplands and waterways. You can sometimes see it peeping out of holes made by Downy Woodpeckers. It prefers trees located near or over standing or slow-moving water. According to renowned birder and conservationist Kenn Kaufmann, it breeds in river-bottom hardwoods or in cypress swamplands. Spring finds the Prothonotary Warbler migrating from Middle America into Southeastern North America, where it fans out and finds breeding grounds along the Mississippi River and other watery grounds in the East. Ebird’s Occurrence Map does not show this bird’s migration habits extending far into Canada. It heads south again in early August and is largely gone by September.

The Prothonotary Warbler eats primarily insects throughout the year, including butterflies, moths, flies, beetles, mayflies, and spiders. It gleans these bugs from foliage. It also eats snails. Kaufmann has observed it winding its way up the trunks of trees searching for food like a nuthatch. On occasion, it will indulge in seeds, fruit, and nectar.

As indicated by its namesake, the adult male Prothonotary Warbler has a deep yellow, almost gold chest and head. Its belly is white, its eyes bright black. The female’s coloring is the same but duller. Its wings are blue-grey, and its back and tail are olive, with a white tip of the tail. Appearance does not change during the non-breeding season. The adult measures anywhere from 5.1-5.5 inches in length, and its wingspan is 8.75 inches; it weighs only half an ounce.

During courting season, the male displays its plumage and competes aggressively with other males by snapping its beak, chasing intruders, and singing. When courting the male and female chip to each other softly. Their song is a loud, ringing tweet-tweet-tweet in one pitch, and their call is a long, dry chip. The male displays potential nesting sites, putting moss in them and moving in and out of them. The female builds the actual nest inside the cavity with moss or liverwort. Prothonotary Warblers spend the majority of their lives below the canopy, singing sweetly from the trees. When hatched, the young leave the nest after 10-11 days and, the fledgling young are able to swim the minute they leave nest and come in contact with water.