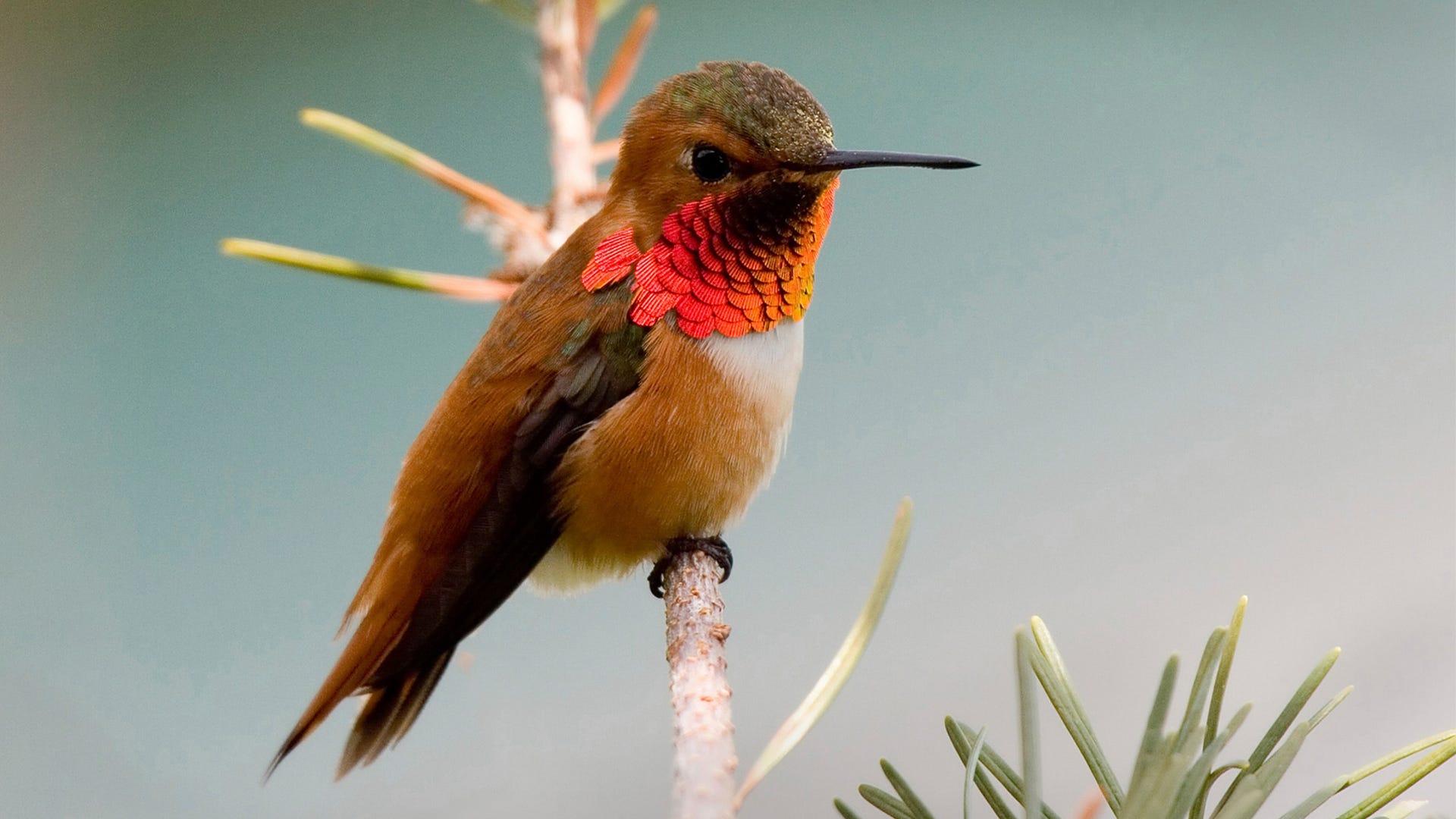 If you’ve ever spotted hummingbirds in your backyard, it is likely that you’ve seen at least one Rufous Hummingbird, especially if you live on the west coast. These birds are well known for their iridescent, fiery plumage, specifically on the males of the species.

They are among the most prominent and easily recognizable species in the hummingbird family, though their history and population dynamics remain somewhat unknown. One of the reasons for their popularity is that Rufous Hummingbirds live in many different regions. Their habitat range has provided these feisty birds with a wide audience to appreciate their beauty.

The migration patterns of these birds are just one of the many interesting facets of Rufous Hummingbirds. They have the longest migration route of any type of hummingbird – over 2,000 miles in one direction from the northwest United States down into Mexico and the Gulf Coast. Additionally, their travels take them farther north than other Hummingbird varieties.

Of the hummingbirds with a western North American range, this is the species most likely to be spotted in the northeast. In fact, Rufous hummingbirds have been located in many corners of the United States, because they can adapt well to just about any environment.

Though these beautiful birds prefer open woodlands and coniferous forests with plenty of shrubs, they are not especially picky. Rufous Hummingbirds don’t mind residing near people in areas where the natural habitat has been altered. For this reason, they can often be found dwelling in parks and public gardens. As long as they have enough food available and safe shelter to sleep, these birds will be satisfied. 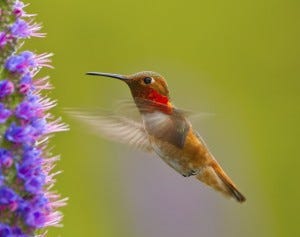 Like other hummingbird species, Rufous Hummingbirds center their diet on protein and sugar. Naturally, the sugar is supplied in the nectar they drink from colorful, tubular flowers, which they access with long, extendable tongues.

Because of their great memories, Rufous Hummingbirds can keep track of which flowers are ready for feeding. Another remarkable facet of their brilliant memory is their ability to remember where hummingbird feeders are placed from previous years along their migratory journey

Protein is obtained by eating insects that these hummingbirds snatch from the air or nearby plants. As with all hummingbirds, these feisty birds need to consume a lot of food to maintain the energy required for their lengthy migration and daily activities. They consume as much as three times their body weight in food every day because they burn it off so quickly. To do this, they feed almost continuously throughout the day for periods of less than a minute at a time. 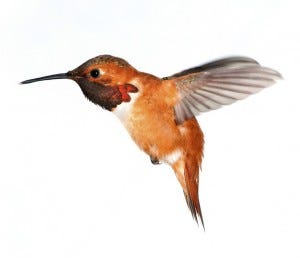 The Rufous Hummingbird is a relatively small hummingbird, measuring a mere 2.8 to 3.5 inches in length and weighing an average of 3 to 5 grams. The males of the species tend to be slightly smaller than the females. Rufous Hummingbirds have a slender, almost straight bill that is ideal for dining on nectar. Their tails, which splay out in flight, taper to a neat point when resting. These hummingbirds have a fairly short wingspan, averaging 4.3 inches across.

Like many species of birds, the coloring of the Rufous Hummingbird differs from the males to the females of the species. Male Rufous Hummingbirds have a flame-like color pattern. In fact, their species name is inspired by their reddish-brown or rufous coloring. Males are characterized by a vivid orange-red throat with rusty coloring on their belly region and back. Males occasionally have green on their back or head.

Female Rufous Hummingbirds have much less orange plumage than their male counterparts, with just a soft spot of the iridescent coloring on the throat. In addition, females have some white feathers on their throat and the tips of their tails. However, it is their green upperparts and rufous tails and flanks that make them stand out from the males of the species. Females of this species are sometimes mistaken for Allen’s Hummingbirds because of their similar green coloring. 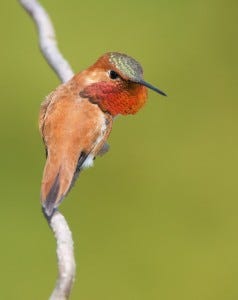 Rufous Hummingbirds are well known to be incredibly feisty and pugnacious. You will frequently find these birds chasing away other hummers from feeders and nesting sites as they are very territorial. Rufous Hummingbirds will stay close by to monitor and protect their feeding areas from other hummingbirds, bees and anything else that feasts on nectar, even when they are not currently eating. They don’t like sharing their resources, so they aren’t considered especially social birds.

Their territorial behavior is aided by their propensity to hover out of sight nearby and their incredible speed. Rufous Hummingbirds can dart in and out of hiding places and feeding stations with precise maneuverability. This makes it easy for them to constantly chase away other creatures that they see as invaders.

Rufous Hummingbirds are not monogamous birds. During mating season, males attempt to mate with as many females as possible while females build nests. Unlike many hummingbird species, Rufous Hummingbirds do not participate in elaborate courting rituals. In fact, mating and migration seasons are among the only times these birds regularly interact. 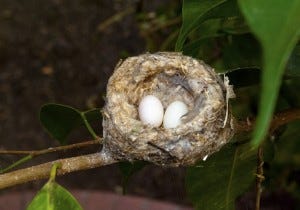 Upon arriving at their breeding grounds, females begin nesting within three days. Their nests are typically placed approximately 30 feet up in trees, hiding them among drooping branches. Females build their nests without the help of the male, using soft plants that are held together by spider webs. Nests are then camouflaged with materials such as moss or bark. When finished, nests are a mere 2 inches across.

On average, a Rufous Hummingbird brood consists of 2 to 3 small white eggs. Females incubate the eggs for 15 to 17 days.  After hatching, the offspring remain in the nest for approximately 19 days before leaving. Rufous Hummingbirds only raise one brood a year. Not always by the same bird, nests are sometimes reused the following year.

Rufous Hummingbirds in Your Yard

Have you spotted a Rufous Hummingbird in your area? Share your pictures on your next visit to Facebook!

Also, be sure to subscribe to our e-newsletter, which will provide links to other interesting articles and notify you of new products.