The store will not work correctly in the case when cookies are disabled.

There’s something amazing about having animals in our lives. Their healing powers go far beyond stormy evenings curled up at the foot of your bed, or the energetic greeting you get after a long day. Animal pals can provide therapy, serve in the armed forces, and make our dining experiences just a little bit brighter.

We love our animals for their quirky personalities and the unique features that make them the best dogs, cats, birds, rabbits, and fish they can be.

To understand just how far that love goes, we surveyed 1,000 Americans about their pet preferences and the personality traits they often assign to their companions. We even asked about the voices they use when talking as or to their pets. Want to know just how acceptable your best baby voice is at the dog park, or if you’re the only one talking to your birds at feeding time? Keep reading to find out.

Our Furry Friends at Home 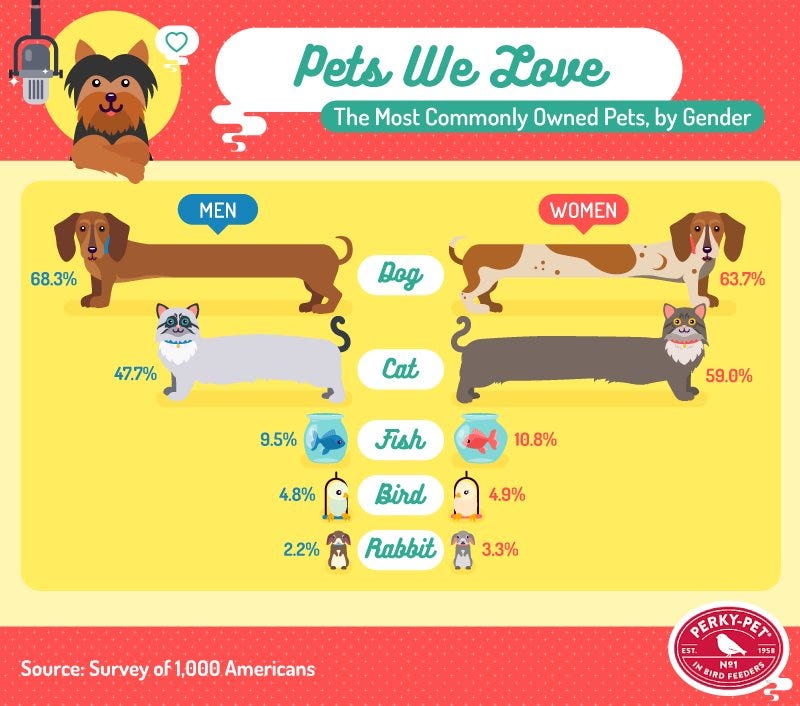 Americans love their pets. According to one survey, some people have even preferred having pets to children since the recession, and some research has found Americans are sometimes more empathetic toward pets than humans. Considering more than two-thirds of American families have a pet, there are no two ways about it: Our furry companions are a part of the family.

Our survey found more people owned dogs than any other type of pet. More than 2 in 3 men had at least one dog, while slightly fewer women (less than 64 percent) said the same.

Cats were slightly less popular. Just under half of all men surveyed had a cat, while 59 percent of women owned a feline friend.

Roughly 1 in 10 men and women owned at least one fish, and less than 5 percent shared their home with birds or rabbits.

What’s in a Name? 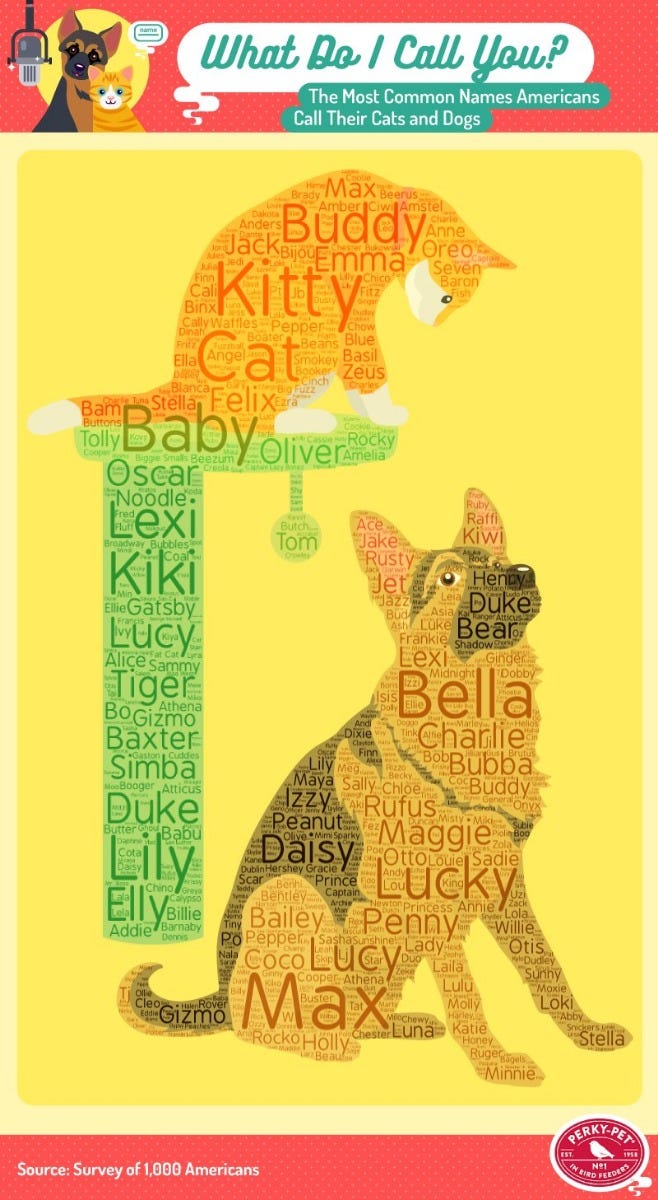 Deciding what to name your fur-children can be a labor of love. You want to pick a name that is fun and creative but also helps embody their personality and place in your family. And, of course, there’s the opinion of the rest of the family to consider (if you’re not shopping for a pet alone), and the name they might find suitable.

Cat names were perhaps slightly less unique. Not straying too far outside the (ahem, litter) box, “Kitty” was the most popular name for a feline. However, for the more adventurous, “Lily,” “Oscar,” “Lucy,” and “Tom” were also popular names for cats. 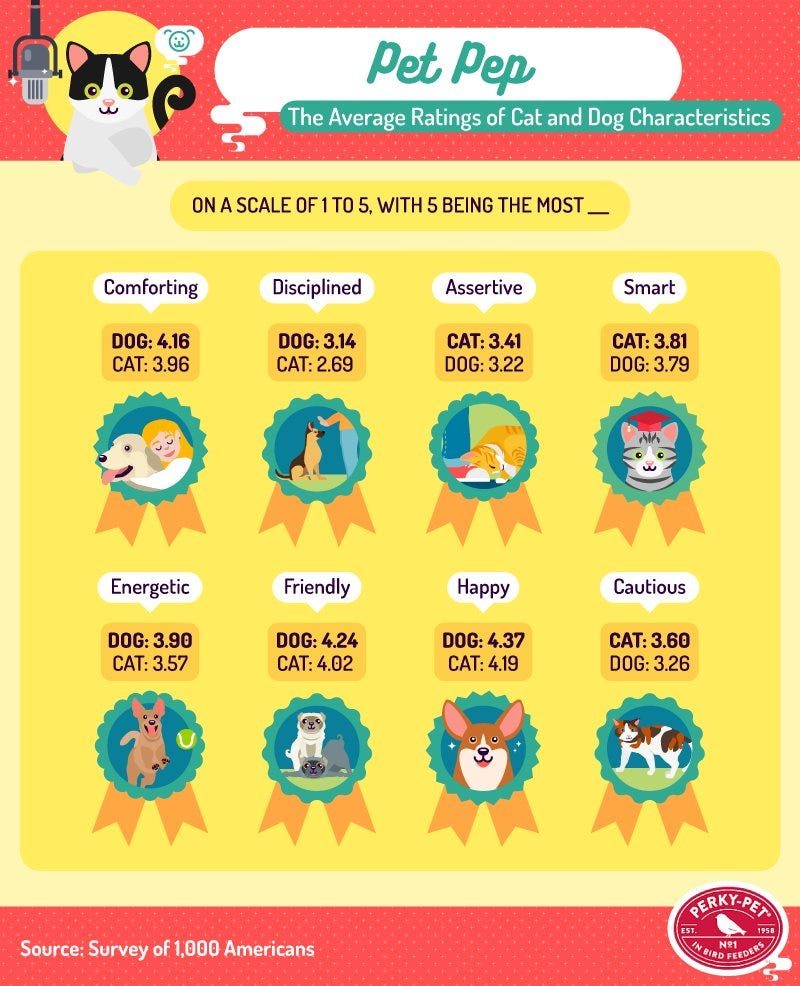 Cats indeed tend to have human-like qualities. While we may not always understand them or know where they are when they’re out of sight, there are a couple of things we can expect from their personalities. Cats were considered to be the most assertive, cautious, and smart. They may not immediately take to new guests and might be wishy-washy with affection, but there’s more to them than catnip or catnaps.

When it comes to dogs, research has shown these lovable pooches mirror the personalities of the people who own them. Sometimes they even look like them, too. While we can’t discern if people were thinking of themselves when they awarded these pet-tacular superlatives, we can at least say the 1,000 pet owners polled crowned dogs the most comforting, disciplined, energetic, happy, and friendly.

Some dog breeds are known for certain personality traits – or at least that’s what social media quizzes would like you to believe. To understand which personality characteristics are dead on, we asked survey participants to tell us how they viewed different types of dogs.

Pit bulls are often characterized as one of the most dangerous and unpredictable breeds of dog. While they can often be discriminated against, there’s no scientific evidence to indicate pit bulls (or the various dogs categorized as pit bulls) are any different from other breeds. According to our survey, pit bulls were ranked as the most comforting dog breed, earning a 4.6 on a scale of one to five. In fact, pit bulls were considered more comforting than Yorkies, poodles, and German shepherds. With pictures like these, we aren’t surprised to hear about their lovable nature.

Golden retrievers are among the most popular dog breeds in the country. Accordingly, they were voted as the most cautious, friendly, happy, and most disciplined breed around.

How We See Ourselves in Our Pets 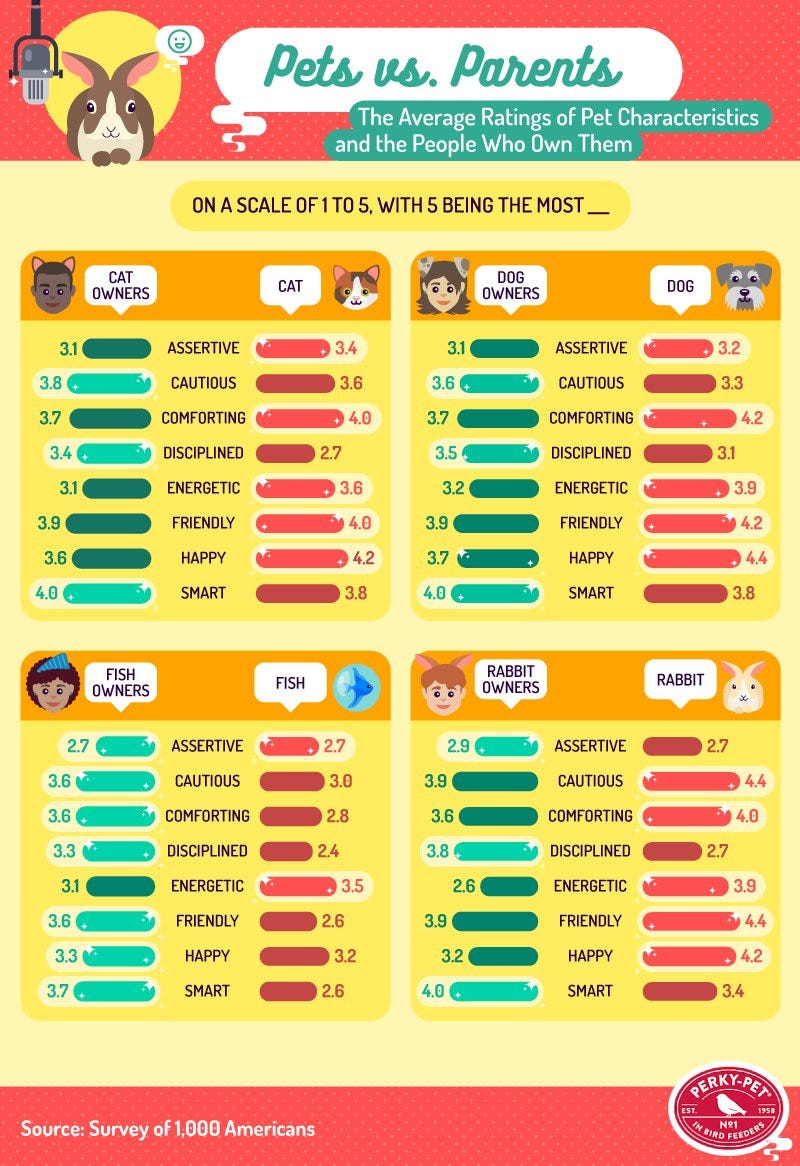 To find out just how much pets and their owners have in common, we asked survey participants to rank the personality traits of dogs, cats, fish, and birds compared to themselves.

When it came to dogs and cats, people sometimes thought more highly of their animals than themselves. Men and women both felt their dogs and cats were more assertive, comforting, energetic, friendly, and happy than they were. Cat owners only marginally identified themselves as smarter, on average, than their feline companions. While rabbit owners didn’t find their pets as smart, they felt like their bunnies might just be more cautious than them.

While friends of Nemo and company said they had more vibrant personality traits than their fish, fish owners did rate their fish as equally assertive and slightly more energetic than them.

The Voice of Pets 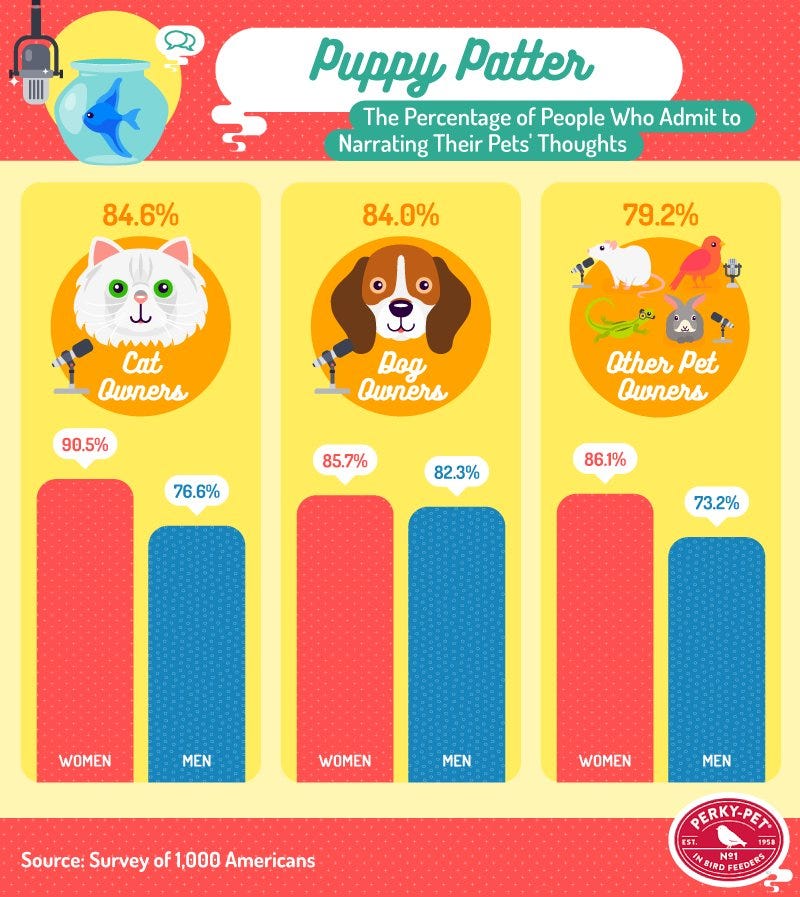 The odds are you’ve probably done it before. We get to know our pets so well, they become members of our family. Of course, family members almost always have something to say, and these furry companions just need a little help from their humans to vocalize their internal monologues.

When we asked participants if they’ve ever talked as their pets, around 84 percent of dog and cat owners said yes. Women were more likely than men to give their pets simulated words and voices – over 90 percent of women who owned cats didn’t let their furry felines go without having a few words of their own, compared to less than 77 percent of men who owned cats. When it came to the voices men and women gave their dogs, the margin was even slimmer.

Other types of pets – like fish, birds, and rabbits – were slightly less likely to earn vocalization from male owners. Only 73 percent said they gave these less common groups of companions their own voices, compared to over 86 percent of women.

How we talk to our pets and how we talk as our pets aren’t always the same. When talking as their cats and dogs, pet owners were more likely to increase the pitch of their voice but also to decrease the overall speed of their speech. When Max and Bella are “telling you” just how much they want that treat, they’re more likely to do it at a slightly slower speed than their tails are wagging.

Rabbits, in general, were more likely to earn significantly higher pitched voices with even slower speeds and a lower volume, while pets like fish and birds “spoke” slightly louder.

People polled were more likely to admit raising their voices when speaking to their pets – raising the pitch of their voice, that is. Max and Bella may get really excited about answering the question “Who’s a good dog?” by the tone of your voice alone. Rabbits and other types of pets, including birds, saw a similar increase as well. 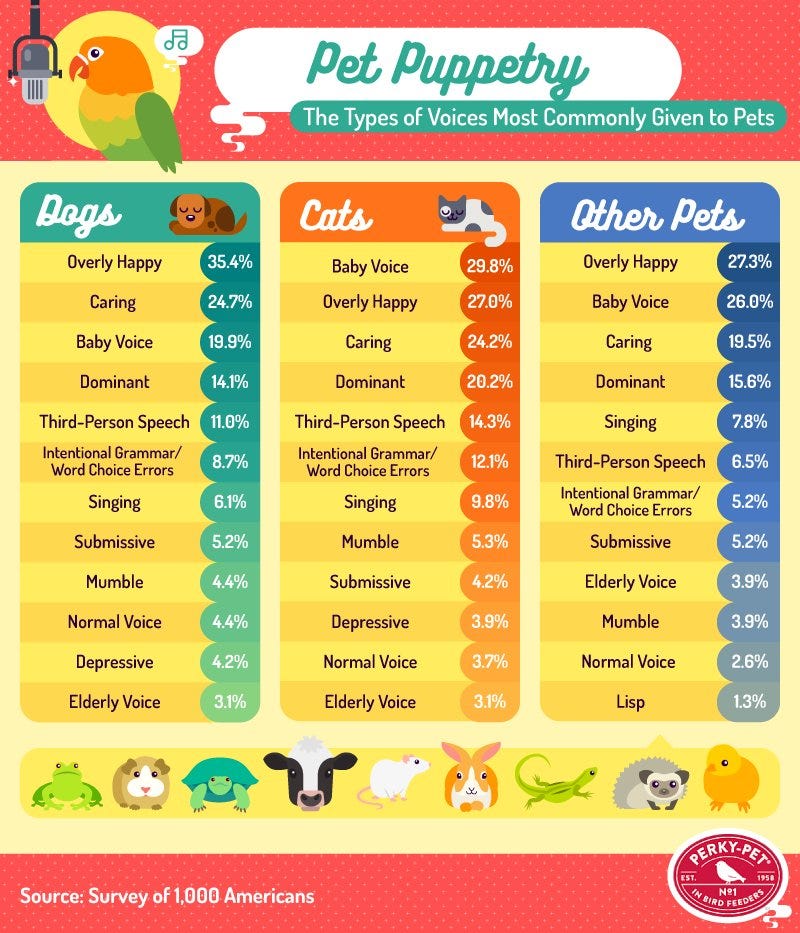 Dog owners believed their dogs were happier, on average, than they were. Given their jovial disposition, more than a third of owners who reported narrating their dog's actions and thoughts gave them an overly happy tone of voice. Nearly a quarter also used a caring tone when describing what they imagined their canine companions might sound like.

Cat owners, on the other hand, were more inclined to give a baby voice to their feline friends. While we found cats are often considered assertive and cautious, pet owners couldn’t help but find them caring and friendly at the same time. Just over 20 percent of cat owners preferred to use their best dominant voice when imitating their cats – proving who’s actually in charge around the house.

Other pets, like birds and fish, also earned the overly happy overlay, followed by the baby voice and caring tone.

Your Pet, Their Voice

At the end of the day, there’s no denying how much we love our pets. We’re willing to risk our lives to save theirs – even if they don’t exactly classify as a pet. Some people have even gone so far as to ensure their furry friends made it all the way into their last will and testament, sometimes outpacing blood relatives.

Our love for cats, dogs, birds, fish, and rabbits (among other domestic pets) leads us to imagine what it would be like if they could hear what we’re saying to them and even talk back. The voices we give them are our interpretation of what makes their personalities so great.

We surveyed 1,000 American pet owners. For respondents with more than one pet, we asked them to think of only one pet of their choosing when answering questions related to their personality and speech.

If you’d like to use any of our information or images about pets, their personalities, and voices, we grant permission to share all images and information on this page freely for noncommercial purposes. When doing so, we ask you please credit back the authors by providing a link to this page and crediting the authors.