Anatomy Of A Hummingbird: What Makes Up These Tiny Birds?

Did you know there are between 328-340 hummingbird species! Most species can be found in tropical climates, such as Mexico. However, they can also be found from far south as Argentina to as far north as Alaska. So how can the bodies of these little creatures conform to various climates and environments? To answer this question, we need to learn more about the hummingbird anatomy.

We will look at the Ruby-Throat species anatomy because of its prevalence here in the US. Primarily the Ruby-Throat anatomy is like most birds, although there are variations in the size of their parts/structures, etc.

Hummingbirds vary in weight anywhere from 2 to 20 grams, which can be compared to the weight of a small piece of jewelry, or small coin. A tiny frame equals small eggs, which are about the size of a pea, while their nest is the size of a walnut! 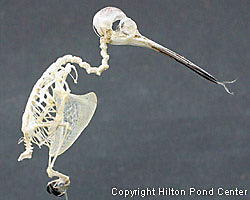 The mouth of a hummingbird is unique. The bill measures about 15-20 mm in length and can open to just about 1cm wide, which is comparable to the width of a fettuccine noodle. One common misconception is that the bill is used as a straw to slurp up nectar. This is not true; in fact, the hummingbird tongue is used to ingest nectar in the way a dog or cat drinks water (about 12 slurps per second).

The digestive system of hummingbirds is made up of over eight organs which help the hummingbirds’ metabolism to run efficiently. They can also store up to 45% of fat in their livers around the time of migration, which explains their ability to expend such large amounts of energy.

Hummingbirds to some extent have the largest heart of all animals. Their heart is 2.5% of their weight. 250 beats per minute is their average heart rate, which increases to about 1,220 beats per minute in flight. The state, known as torpor, allows hummingbirds to conserve energy and lower their basal metabolic rate. They do this by lowering their body temperature from a normal 105 degrees F, down to 70 degrees F.

The muscular system is one of the most important – especially the chest and wing muscles that allow them to fly. These muscles make up a larger portion of their weight – about 10% more than other flying birds. Unlike other birds, a hummingbird's elbows and wrists bones are fused together. However, their shoulder has a motion of 180 degrees. Because of this motion, a hummingbird's wings are no doubt a powerhouse!

Hummingbirds in flight are often compared to that of a helicopter. The only difference is a helicopters propeller action which moves in a circular motion continuously, while a hummingbird's wings move backward and forward while switching angles – somewhat like a figure 8 motion. This motion allows them to remain balanced in flight. More so, the chest muscles (over a 1/3 of their body mass) helps to power its wings.

The hummingbird reproductive organs are active during mating season only, which is typical for most birds. When a female becomes pregnant, they form “offspring” patches on their bellies. The belly feathers fall out and the belly becomes full of fluid creating a warm water pouch so the mother can keep her young warm and so that her eggs can eventually hatch.

The brain of a hummingbird is large compared to its body, however, it is suggested that they may rely more on instinct, unlike some other songbirds who have a small ability to learn. Larger areas of a hummingbird brain include the areas that control their muscle activity and vision.

The senses in hummingbirds vary. They lack a sense of smell, while their sense of vision is strong. They have increased light and color sensors. So to answer the question, are hummingbirds more so attracted to the color red… they are attracted to red because so many of the flowers they receive nectar from are red. However, because their visual senses are so intense, they appear to see other colors just as well. Ultimately, where there is nectar – they will come!

For being such a small bird, hummingbirds have more bones than you would think. Most have 2 more ribs and about double the neck vertebrae found in other birds. However, the number of bones in a hummingbird body is unconfirmed.

Nature is truly amazing, and we can appreciate its complexity when studying species such as the hummingbird. So, the next time the subject of hummingbirds comes up, you can impress your friends and family and act as the hummingbird expert!