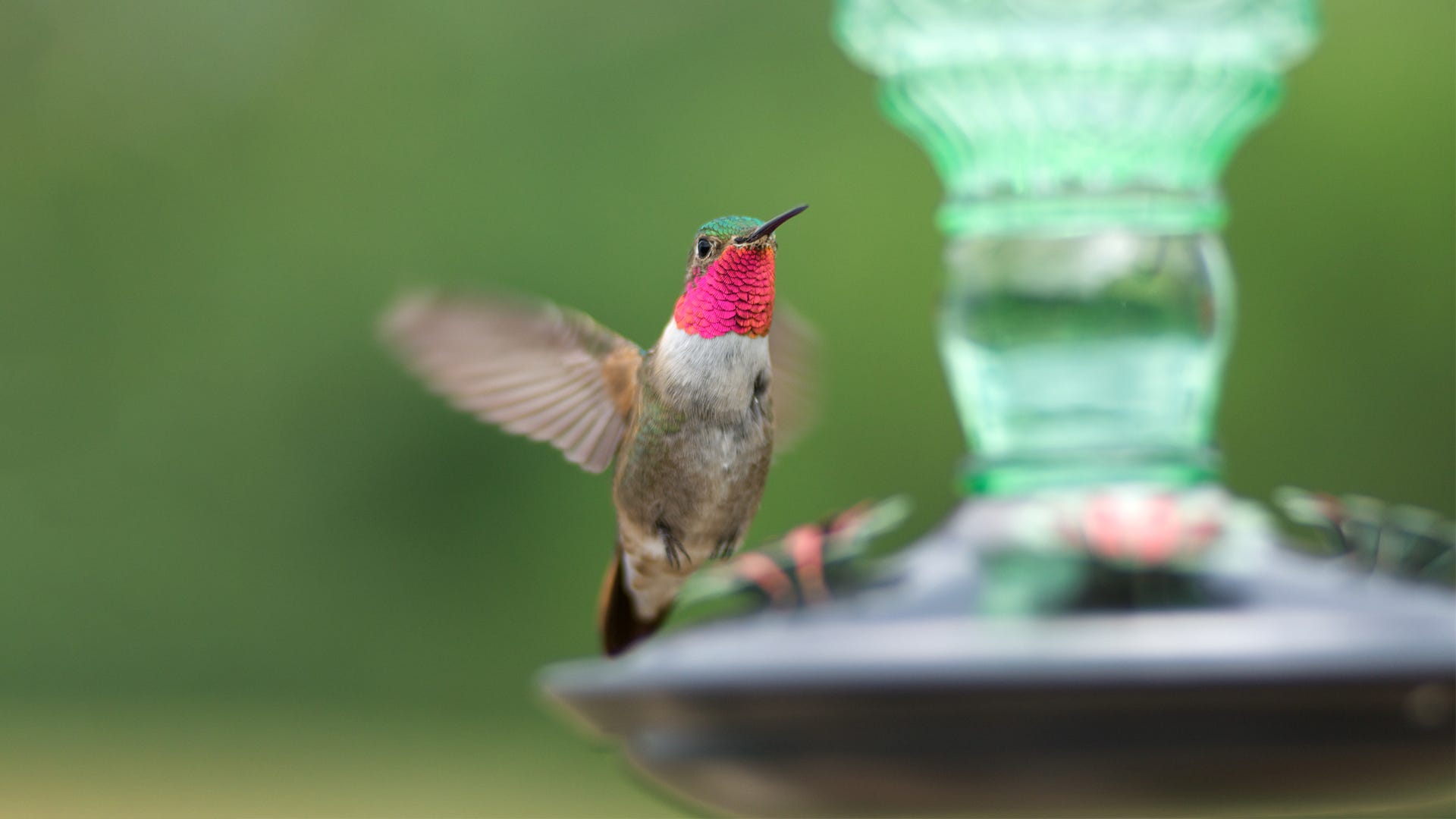 Did you ever think of hummingbirds as “Flying Jewels”? The early Spanish explorers to the New World did, that’s why they named them “Joyas Voladoras.”

They probably chose the name because of the brilliant radiant colors on hummingbirds that comes from their iridescent coloring resembling a prism or the shimmer of a soap bubble. Hummingbirds can flash their bright colors, as well as hide them when needed. Just like clothing, these feathers change over time with wear and exposure to the sun. For example, when fresh, the feathers on an Anna’s Hummingbird are rose red, but they fade to a coppery bronze color over time.

By the way, those bright flashing colored feathers on the hummingbird’s neck are known as a “gorget,” though that’s not Spanish. Actually, it’s a late Middle English word from the root word “gorge,” think “throat.”

It was originally used in the Middle Ages as a military term for a neck protector against sword strikes. Later, its use became primarily ornamental, as a symbolic accessory. You may have seen George Washington wearing one in a pre-Revolutionary 1772 portrait. It’s the U-shaped, curved brass plate hanging around his neck.

Interestingly in hummingbirds, the gorget may serve similar functions. It’s been surmised that the gorget may aid in mate attraction, signal social status and allow hummingbirds to distinguish themselves among species. Typically, gorgets are found only among male hummingbirds. Males are very aggressive and will chase another male away from its territory. Female hummingbirds, usually larger than the male, find iridescent feathers attractive. When found among females, gorgets appear to serve as a way to signal threats.

Incidentally, hummingbirds do not mate for life and males do not help raise the young. Females build the nest and usually lay a clutch of two eggs. A baby is about the size of a penny. Baby hummingbirds cannot fly and remain in a nest for three weeks. Young hummingbirds lack gorgets. After they fledge, which means to develop the wings enabling them to fly, young hummingbirds need to intrude on adult territories to feed. The lack of a gorget enables them to be less visible and less threatening to adults.

Hummingbirds can see farther and hear better than humans, though they have no sense of smell. They’re pretty smart, too! They remember every flower they have visited and know how long it will take a flower to refill. 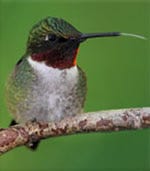 When feeding, they don’t drink through their beaks like a straw; they lap the nectar with the aid of tiny hairs on the tip of their grooved, w-shaped tongues. Their beaks are just like any other bird’s beak, just longer in proportion to their bodies. On average about 8.5 centimeters long from tip of beak to tip of tail and weighing between 2 and 20 grams (with a penny weighing about 2.5 grams).

Not surprisingly, hummingbirds get their name from the humming sound their wings produce, beating 70 times per second when flying and 200 beats per second when diving. So, in the Caribbean, they’re “El Zunzun,” the hummer. In Portuguese, they’re better known for their feeding habits as “Beija-Flor,” flower-kisser; and alternately in Spanish as “chupaflor,” for flower sucker and “picaflor,” for flower nibbler.

Want to attract these flower-kissers to your yard?  Check out our line of Top Fill Hummingbird Feeders. Feeding the hungry hummingbirds has never been so easy!