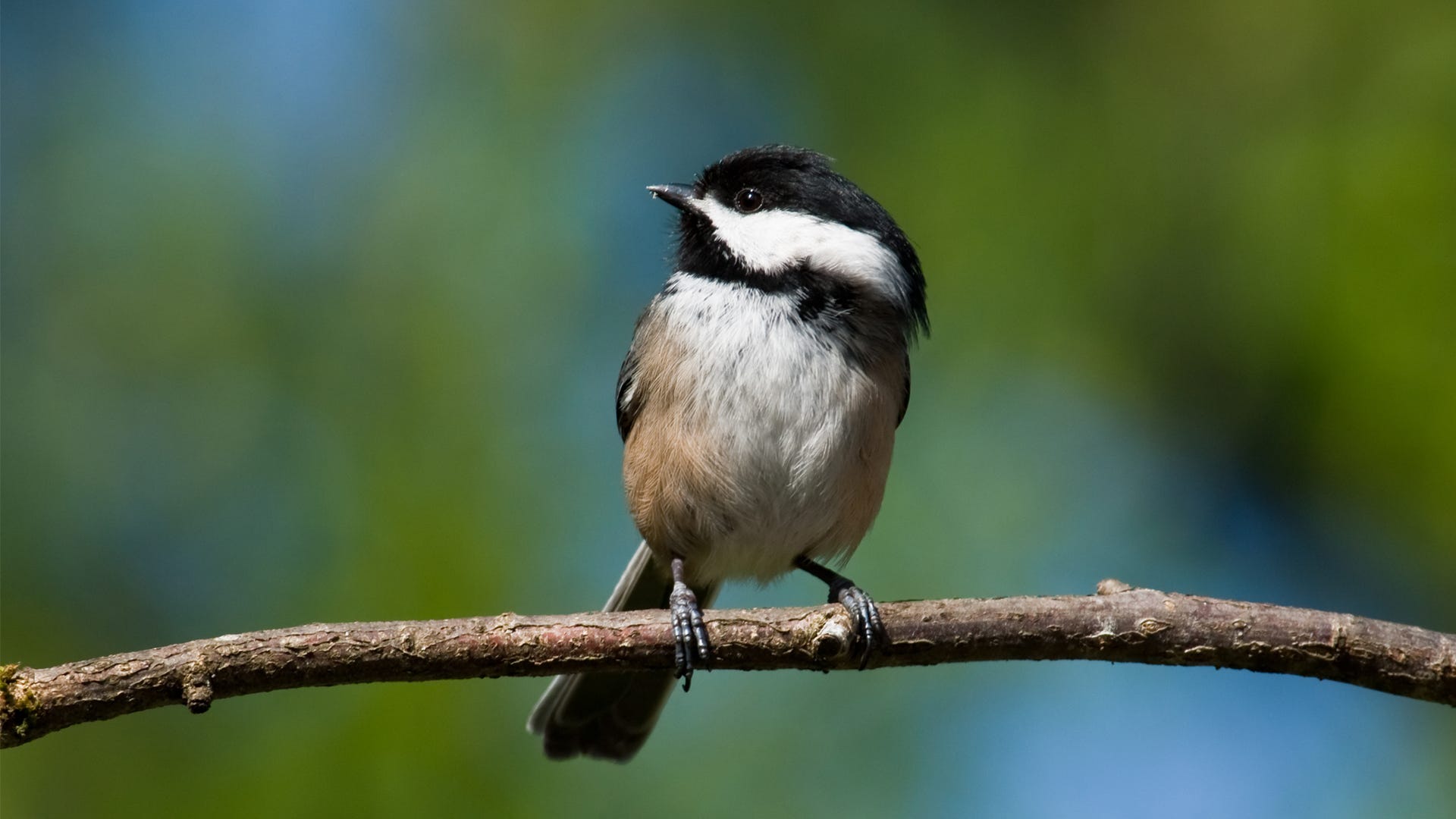 Even if you’re not an avid bird watcher, chances are you are able to identify this round, friendly and petite wild bird as the Black-capped Chickadee. These birds frequent backyard feeders and can be found year round, establishing nests in bird boxes or deciduous and mixed forests throughout North America. Their energetic and bouncy flight combined with their large head on a tiny body, makes Black-capped Chickadees absolutely adorable birds.

The Black-capped Chickadee is accompanied by titmice as part of the Paridae songbird family, and can be found year round in the northern United States and parts of southern Canada. This species commonly resides and feeds in wooded areas and is considered among the least concern for conservation. There is an estimated breeding population of 41 million Black-capped Chickadees in North America.

Man-made nest boxes, natural cavities, and abandoned woodpecker cavities provide regular sleeping quarters for this chickadee. Its nests can be found at varying heights from ground level to over 60 feet high. While the bird seeks shelter in mainly deciduous forests, breeding pairs are especially attracted to bird boxes filled with sawdust and wood shavings.

Despite their nesting behavior, they are solitary when roosting overnight. Even in the coldest winter weather, Black-capped Chickadees sleep in their own individual tree cavities. 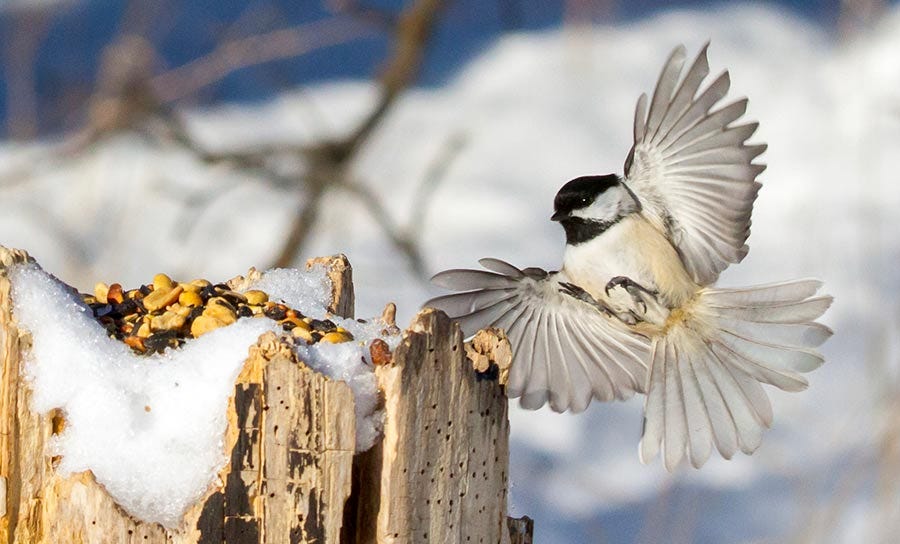 While its feeding habits and diet vary by season, the Black-capped Chickadee is considered an omnivore because its diet consists of insects, seeds and berries. In the warm summer months, it feeds mainly on caterpillars and other insects. They also snack on invertebrates, such as snails. Vegetable matter, berries and seeds make up at least 50% of this chickadee’s winter diet.

These black, white and gray birds can often be found scouring the surface of trees, branches and twigs for food, at times hanging upside down to reach the underside of branches. The Black-capped Chickadee is known for being able to store and hide excess food in thousands of locations and remember where each item is stored. This behavior, called caching, helps them feed through the lean winter months.

These wild birds are often spotted clinging to backyard bird feeders. They are particularly attracted to protein-rich seeds and suet. While they frequent feeders, they rarely remain at the feeder for more than a few moments, just long enough to retrieve a single seed. Instead of eating the seed right away, they will often flit away to eat or cache it for later. 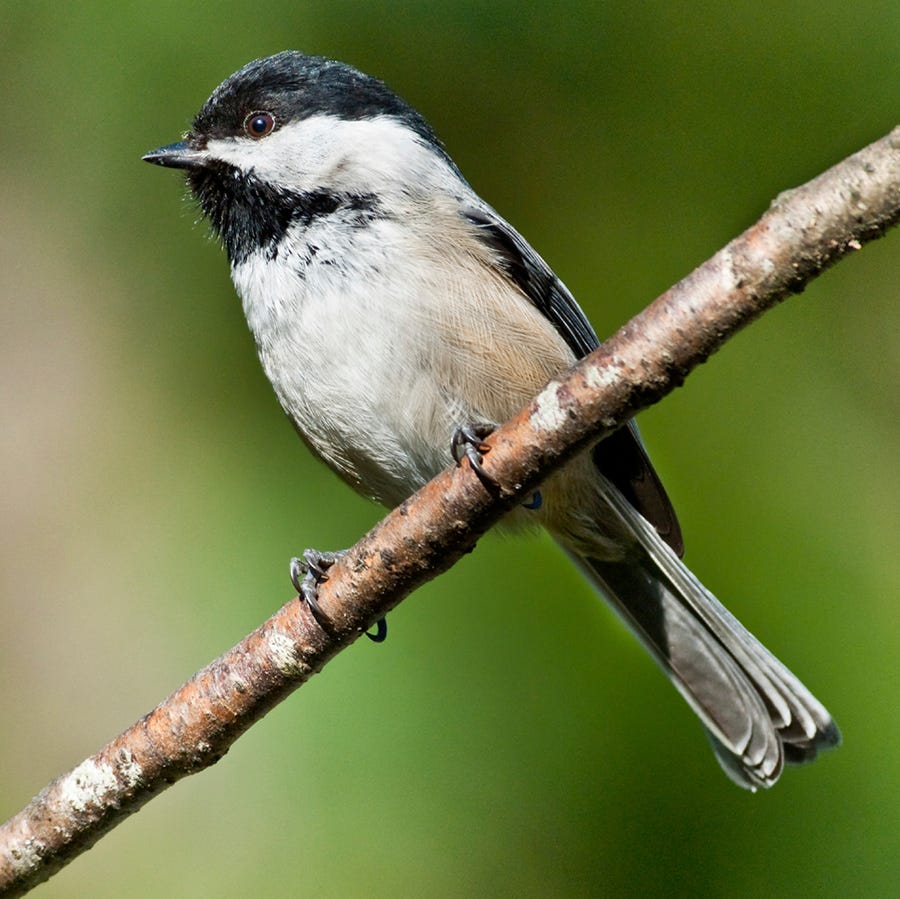 The Black-capped Chickadee is slightly larger than its similar-in-appearance cousin, the Carolina Chickadee, with a wingspan of 6.3 to 8.3 inches and average length of 4.7 to 5.9 inches. This bird is known for its petite stature and tendency to hop along the ground. Chickadees have a small sharp beak, ideal for cracking open seeds and excavating tree cavities for nesting.

Male and female Black-capped Chickadees appear almost identical. Both possess the species’ trademark black cap and throat, which are separated by chubby white cheeks. Despite the obvious size difference between the adult and juvenile chickadees, they share the same coloration and markings as fully-developed Black-capped Chickadees.

The bird’s oversized round head and rotund body are considered among its most endearing traits.

Chickadees are vocal and social creatures that use specific calls to communicate with each other and the other birds in their flock.

This wild bird species gets its name from its distinctive call that, to humans, sounds like “Chick-a-dee-dee-dee”. Depending on how many “dee” notes are included, a call can be used to alert the flock of potential danger. Interestingly, most other wild bird species are able to recognize and interpret the alarm call of a chickadee and take appropriate safety measures to protect themselves.

Its song is so distinctive, that the chickadee is often the first bird that most North Americans learn to identify by its call.

Widely known as a social songbird, the Black-capped Chickadee lives in mixed-species flocks. Other species found in chickadee communities include nuthatches, woodpeckers, kinglets, creepers, warblers and vireos. In the wintertime, chickadees lead these mixed flocks with mated pairs and non-breeding birds. They associate together as the group searches for food while remaining safe from predators, including hawks and owls. 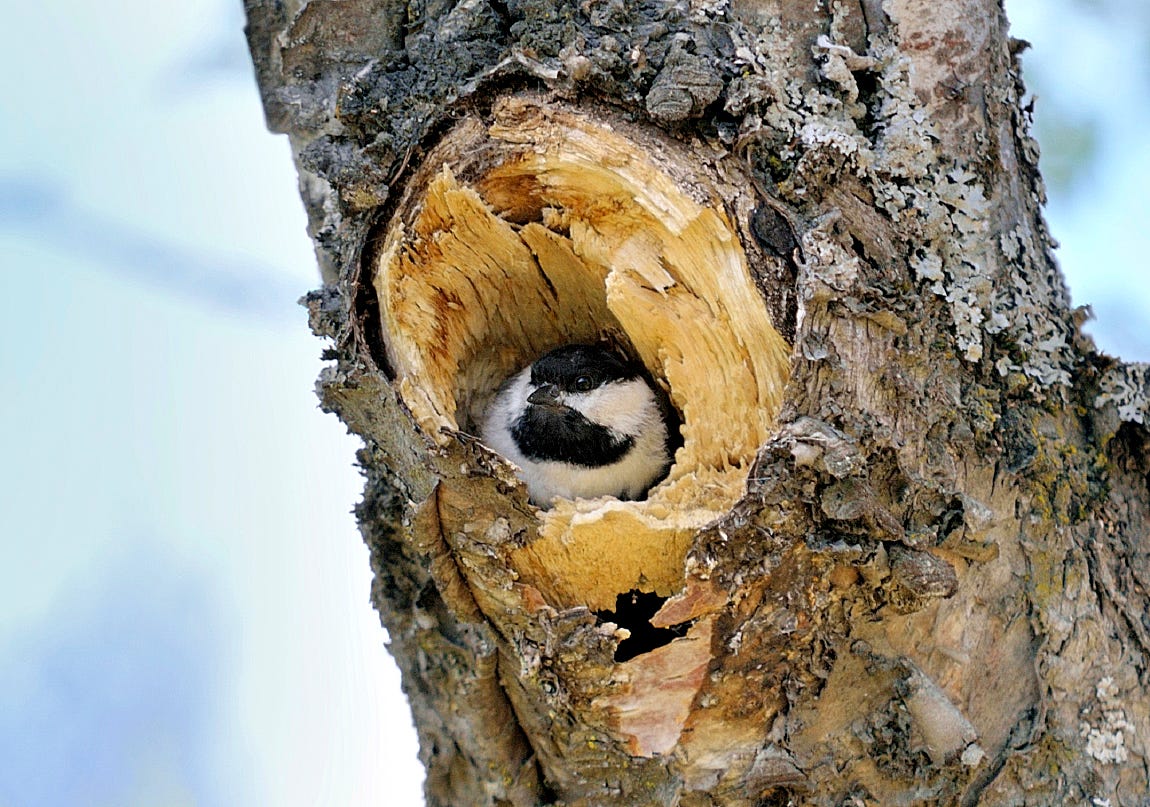 Black-capped Chickadees are considered to live and breed in monogamous pairs, typically forming in the fall and winter. Together the male and female chisel out a tree cavity before the female builds a cup-shaped nest to house the pair’s eggs. On average, a Chickadee brood includes between 6-8 reddish-brown spotted eggs. The female incubates the brood for twelve days while the male brings her food. After the offspring hatches, they leave the nest after 16 days.

While common and easily-identifiable, the Black-capped Chickadee is an ideal bird to attract with your backyard feeder. Its unique call, adorable appearance, friendly characteristics, and active behavior will bring the best kind of bird activity to your yard all year long!