Hummingbirds: The Crown Jewel of Color 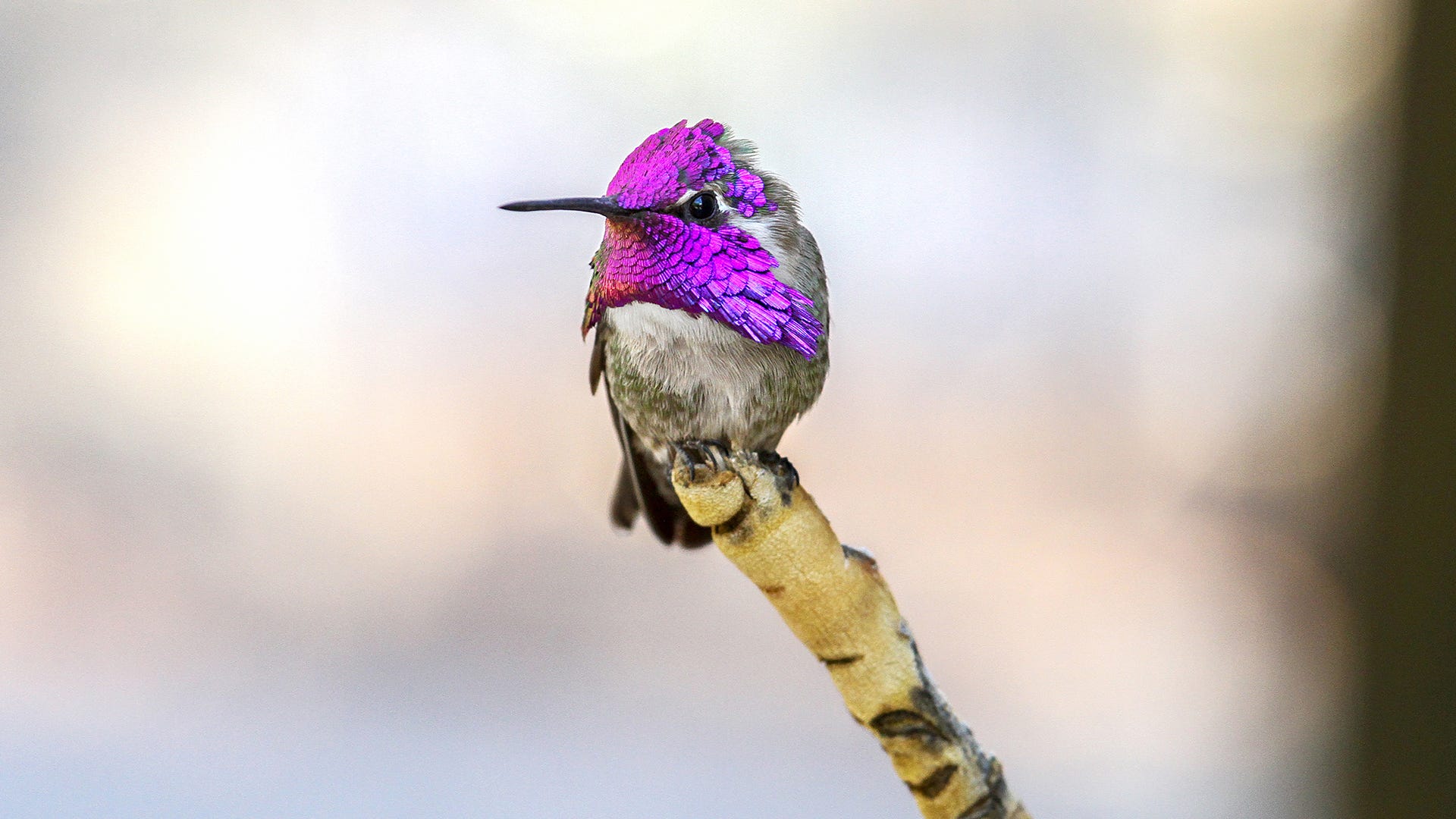 Any birdwatcher with a hummingbird feeder in their yard has been stopped in their tracks by these colorful tiny jewels of a bird. It's all too easy to get caught up watching the array of colors flashing in the sunlight as they buzz about a feeder. Few other species of birds dazzle with a range of colors as the hummingbird does.

What Colors Can Hummingbirds be?

While ornithologists are aware of three 356 types of hummingbirds, there are 5 species that birdwatchers in North America can expect to see. The colors of these dainty birds go way beyond the colors of the rainbow. They give bird lovers a show of colors that can include:

Then there is the gorget. The gorget is the patch of feathers found on the throat and upper breast of the hummingbird. This feature is creates a striking iridescence on the male hummingbird.

The Hummingbirds of North America

This species of hummingbird is a green and coppery orange. The male will have a distinct eye patch and belly contrasting their green back. The gorget is a dark red. The female is a bronze green color, a pale copper on her sides.

If the light hits it just right, the male Rufous appears to be the color of glowering coals, namely a bright orange backside and belly, a fiery red throat. The female is green with rufous washed (brown) flanks, green patches in the tail and a bit of orange on the throat.

This species is typically green and gray, without any rufous marks on the body. The male's head and throat are identified by iridescent red, almost appearing pink, feathers that can appear dull brown when there is no sun.

The male Costa has an iridescent purple crown and gorget, but it's back is green. The female Costa is green with a white underside with a white eyebrow stripe that makes it easy to identify.

The Ruby is a striking green, almost appearing gold in some lighting, with the same green on its back and crown. The underparts are a grayish white. Its name comes from the bright iridescent red throat of the male with its rich green back and crown and grayish white underparts. Another tell-tale sign you've spotted a male Ruby is that in the dark their gorget appears darker than it is.

The varied wavelengths create a spectrum that determines what colors the human eye can see. As you learned in science class, some objects reflect light; some absorb it. Because of this, different objects appear as different colors.

Seasoned and new birdwatchers alike get caught up in the arresting show put on by hummingbirds. As they flit about, it seems as if they change colors rapidly with every move. Though they appear to be changing colors, this has much to do with their iridescent plumage. The shimmer of colors as the sun bounces off their feathers make it appear as if they are changing colors when they are not.

The makeup of the hummingbird enables it to fully use the wavelengths to appear as if it is changing color. Iridescent feathers have layers of air bubbles on the surface which results in the light not staying there when it hits the surface, as it would do with regular feathers. This results in some of the light reaching the surface of the feather and some reflecting back off the bubbles. Some wavelengths travel through the bubbles to the inner surface of the feather, some travel through one layer of bubbles to the layer underneath. This intense combination of reflection and refraction results in light traveling in different directions. These light rays can also cross and combine.

See also: 10 Ways to Get Your Yard Ready for Hummingbirds

This intense activity creates an illusion of changing color, but what it really comes down to is the angle of light changing. Though quite beautiful, it is just an illusion, like what you see what you spot a slick of oil in a puddle, the oil shifting in shape and color when the puddle is disturbed. In the case of the hummingbird, each movement changes the angle of the light reaching the air bubbles, resulting in feathers appearing to change color just as rapidly.

Juvenile hummingbirds, however, do change color as they shed the plumage they are born with. They then begin to show the bright colors of their parents. As the young mature and move about, the light reflects off their plumage, appearing to change colors.

As is typical in most bird species, the male is always brighter and colorful, nature's clever way of helping the male attract a mate.

Fortunately for birdwatchers, the male and female hummingbird can be identified based on the color of their feathers. The jewel tone colors of the male not only attracts females but deters other males. The male's color aids him in showing his dominance. The male hummingbird also sports a gorget, a patch of brightly colored feathers at his throat. The gorget can range in colors such as red, purple, orange, blue, and pink. Thanks to refraction, the bending of sunlight, the gorget will glisten when sunlight hits it.

On the flip side, the gorget can appear a dark black color in order to avoid the attention of potential predators.  Regardless of which species, the female hummingbird does not have bright feathers and is always a dull brown or green. Unfortunately, the juvenile hummingbird is a dull brown, sometimes causing birdwatchers to believe they have spotted a female.

Get Your Hummingbird Feeder Ready

When the cloudy days of spring turn to summer, you'll have a front row seat to a show of vibrant color and aerial antics like no other.

See also: Where to Hang Your Hummingbird Feeders
More Like This