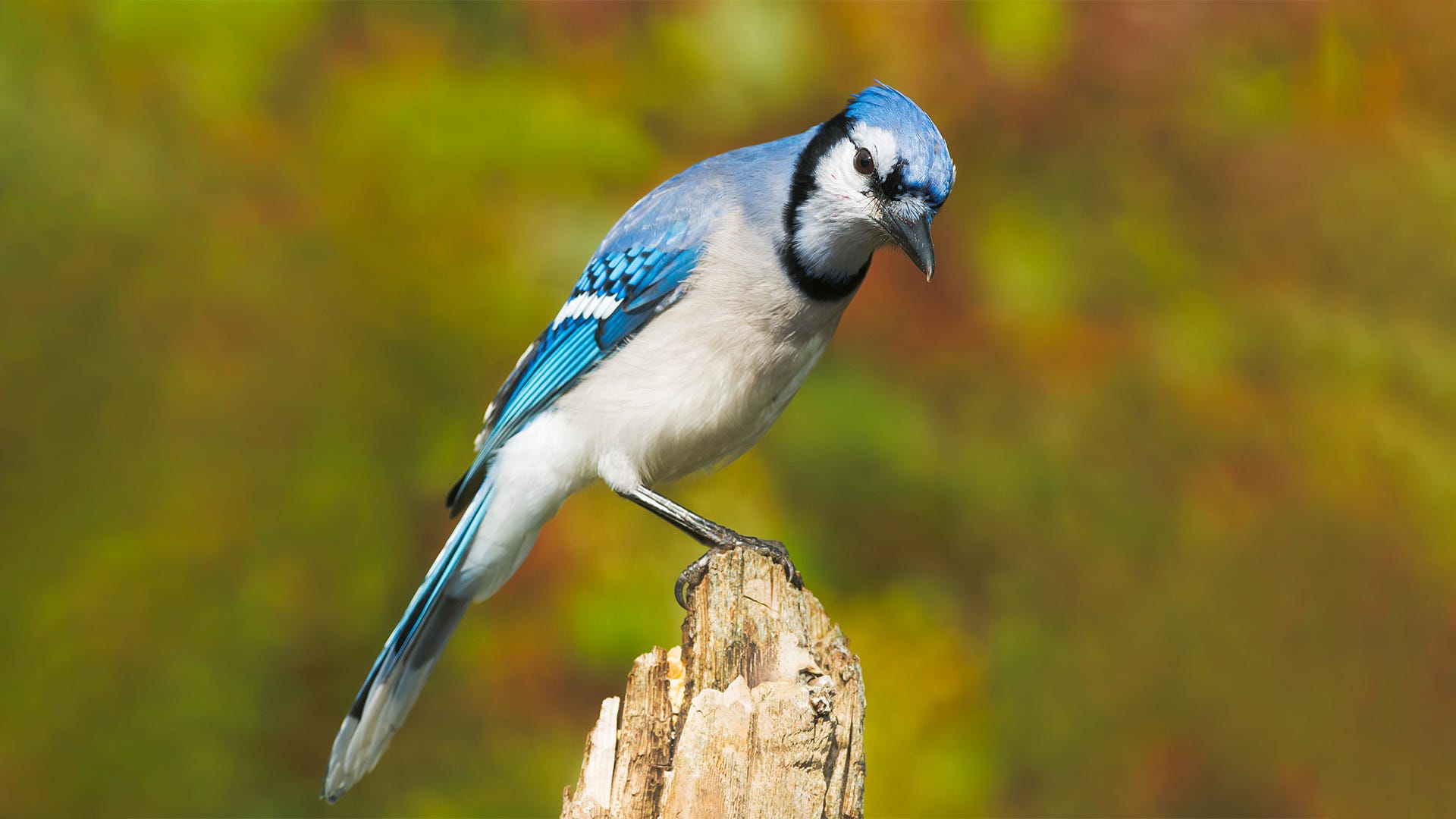 The Blue Jay, a passerine bird from the Corvidae family, has distinctive, colorful markings which make it unmistakable. During the winter months you never know if you’re going to see a Blue Jay because of its unpredictable migrating habits. Science has yet to explain just why the Blue Jay chooses to migrate when it does. So, as the Audubon Society’s Great Backyard Bird Count approaches, look out for this wild-card as a potential entry on your list, unless it has decided to pick up and move to other parts unknown. An ubiquitous North American bird, the Blue Jay is beginning to expand its range beyond Eastern and Central North America into the Northwest. 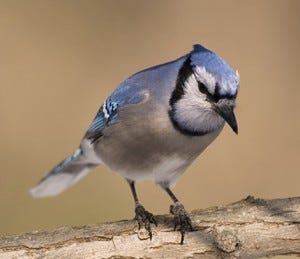 The Blue Jay is a large songbird; this and its distinctive markings make it easy to spot. Male and female are virtually identical. The adult measures from nine to twelve inches, with a wingspan of thirteen to seventeen inches. It has a large crest, or crown, atop its head.

Its blue coloring comes from an effect called structural coloration. Although the pigment of the feathers is brown, the way light catches the cells in the barbs of feathers gives them the blue appearance. The Blue Jay has black banding on its face, nape, and neck that varies from bird to bird and may be used for inter-species identification.

The Blue Jay is attracted to oak trees and the edges of deciduous, coniferous, and mixed forests. It prefers thinner forest areas over deep forest. Its adaptability finds the Blue Jay able to survive well in populated areas, especially parks and back yards with bird feeders available. Its range traditionally extends east from the Rocky Mountains up into Southern Canada and throughout Central and Eastern US; bird-watchers have also sighted it in parts of Idaho and Washington. 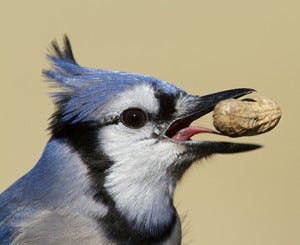 The Blue Jay is an omnivore. It has earned a sometimes negative reputation because it will occasionally scavenge for other birds’ eggs. However, in one study, only 6 out of 530 Blue Jays had bits of egg material in their stomachs.

The Blue Jay diet consists largely of insects, nuts, seeds and fruits. When cracking open acorns and other large nuts, the Blue Jay will use its feet to hold onto the nut. Blue Jays can contribute to forest-growth because they habitually store acorns in the ground and will sometimes not have the chance to harvest the cache. However, using an area in the throat and upper-esophagus, as well the beak, a Blue Jay can carry up to five acorns for transport to the cache.

Blue Jays are quite vocal and voluble. They are adept at mimicking hawks and often employ this trait in order to scare other birds away from feeders or to warn other jays of a hawks’ presence. In captivity they can imitate human speech and meowing cats. Captive Blue Jays have also been able to use strips of paper as tools to pull in food, but wild Blue Jays have never been observed using tools.

These are highly intelligent and social birds whose vocal and physical mannerisms depend upon the social situation. For example, when eating with family members their crest will lie flat. When they are irritated or aggressive the crest is erect. In territorial and food disputes their scream or squawk is loud and abrasive, but when they engage in close communication with each other they have a quiet, “rusty pump” call that is also a song. Blue Jays mate for life.