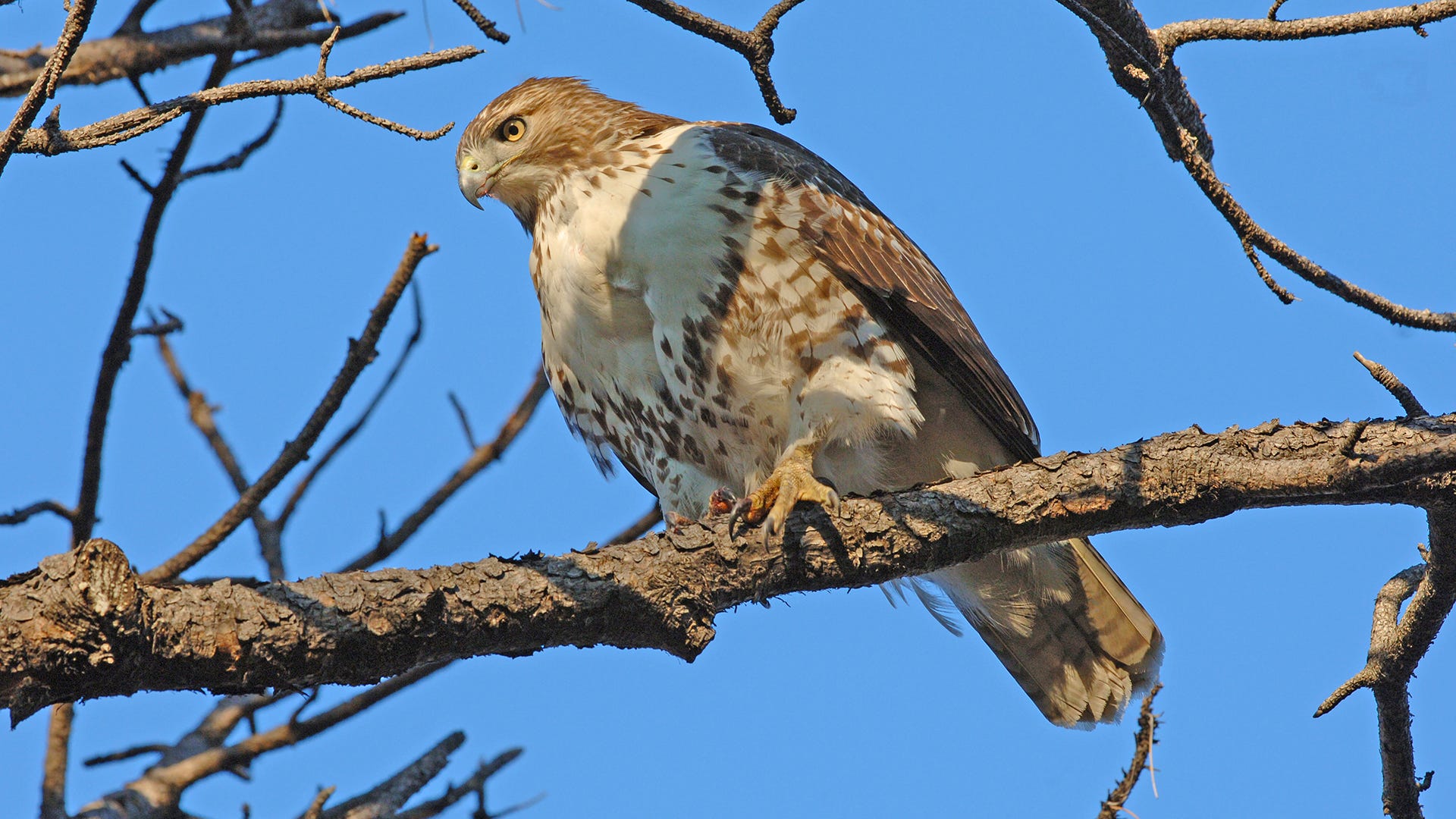 Even though it is rarely found in backyards or residential areas, the Red-tailed Hawk still makes its presence known as one of the most commonly spotted hawks in North America. You can usually see them comfortably resting atop telephone poles and other high perches as they survey the land below for their next meal. Another tell-tale sign of a Red-tailed Hawk is the haunting screech that echoes through the open areas where they hunt.

As a member of the hawk and eagle family, this particular carnivore makes its home in wide open spaces, including fields, deserts, and prairies throughout the United States, Canada and Mexico. This species does not migrate except to follow prey, and typically breeds during the summer months. According to the North American Breeding Bird Survey, Red-tail populations have experienced rapid growth and are strong and stable.

As a bird of prey, this raptor’s diet mainly consists of small to mid-sized mammals. Voles, mice, rats, rabbits, hares, jackrabbits and ground squirrels make up the majority of a Red-tail’s diet. However, it is not unusual for this hawk to prey on snakes and other birds. From time to time, it will even act as scavenger and pick through carcasses.

Typical prey varies in size and can weigh anywhere from one ounce to over five pounds. There have been documented cases where birds of prey like the Red-tailed Hawk have even attacked and killed small household pets.

Most Red-tailed Hawks specifically hunt prey that is plentiful and easily caught. The hawk then proceeds to fly the victim back to a perch where the prey is consumed. If the hawk preys upon a smaller bird, the hawk will pluck the bird’s feathers before devouring it. 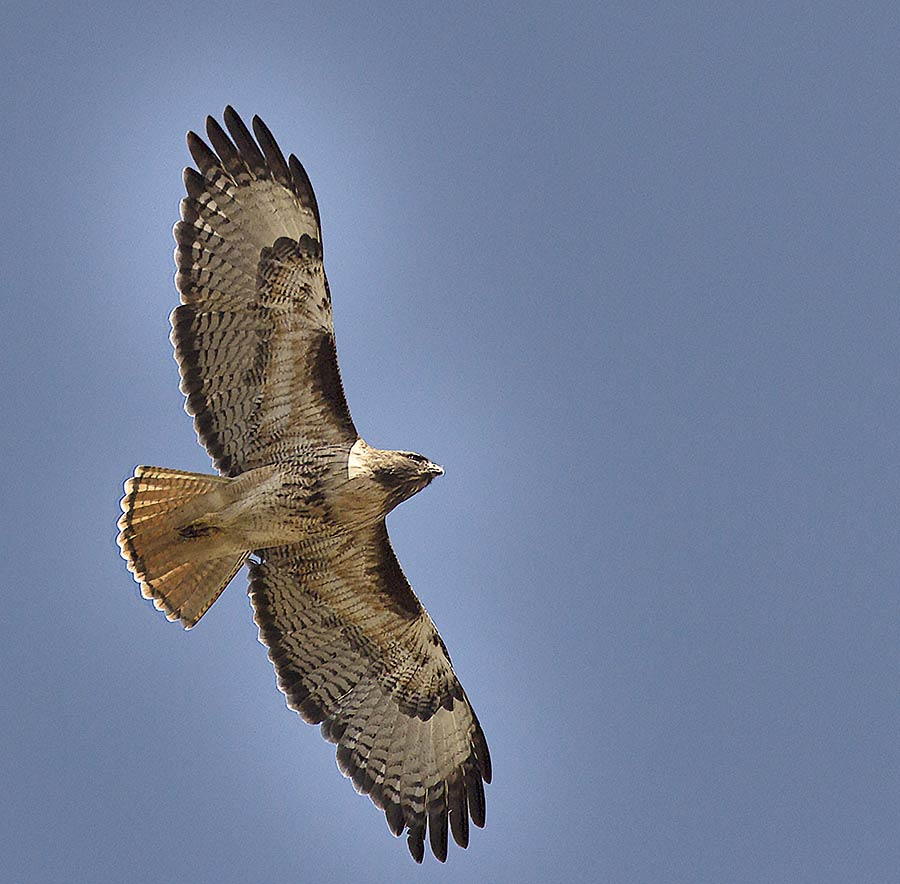 Female Red-tails in flight are sometimes mistaken for a Bald Eagle, but when observed closer, the hawk is tiny in comparison. The average female Red-tailed Hawk measures between 19 and 26 inches long with a wingspan between 44 and 53 inches. The male is slightly smaller in stature. In the wild, the average Red-tail lives about 21 years.

When not silhouetted in the sky, the Red-tailed Hawk is fairly easy to identify. The rich brown coloring on its back, head and wings, contrasted with its reddish tail and pale underside are clear indicators of the species.

Even in flight, sharp-eyed observers will note the hawk’s broad, rounded wings and short, wide tail.

Like several other wild bird species, Red-tailed Hawks are monogamous and are said to mate for life. During the summer months, hawk breeding season attracts bird watchers as these magnificent birds of prey bond with their mates while showcasing some exceptional flight skills. Hawk pairs will fly in tandem and make large circles high in the sky while the male hawk proceeds to swoop down and then rise again to great heights to join its mate. In a truly amazing feat, Red-tailed Hawk pairs can be spotted grasping their talons together and plunging toward the ground in a magnificent free-fall.

A mated pair builds a stick nest together along high cliffs, in tall trees or on man-made structures and buildings. Nests are sometimes three feet tall and are usually lined with natural plant material such as pine needles and bark. Hawk nests are used for several consecutive years before a new one is built. Female Red-tails can lay up to five eggs and both the male and female will take turns incubating the brood for up to 35 days until the eggs hatch.

What’s the best way to spot a Red-tailed Hawk? Go for a drive and watch closely for one perched proudly on top of a fence post or telephone pole. You can also head to the nearest open field and look to the sky for a sight of this majestic hawk’s impressive circular flight pattern. 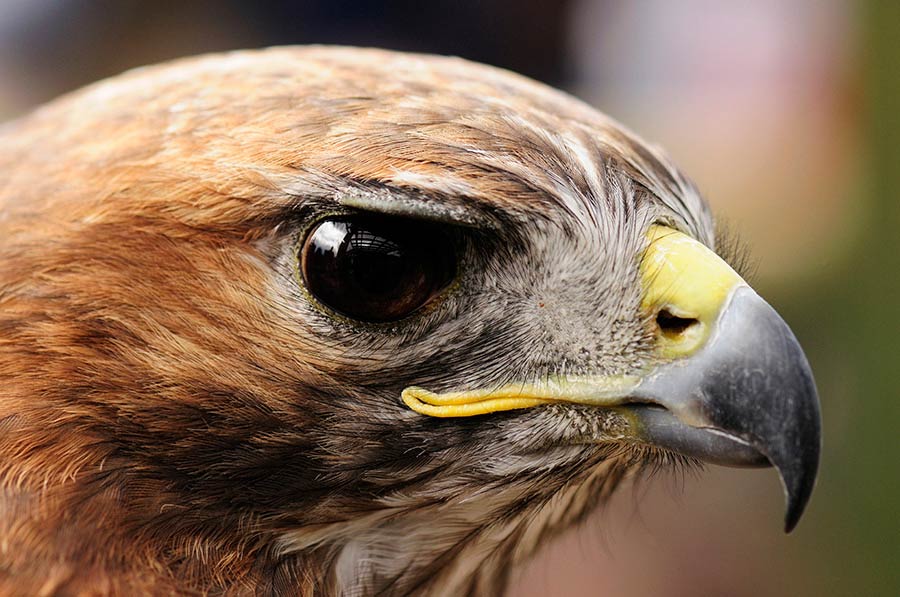