The Sun in Disguise: Hummingbird Myths and Legends

There is a great deal of speculation and ancient myth associated with hummingbirds. Scientists, explorers, and various native tribes who first discovered these tiny birds, named them by myths they believed in and by their magnificent colored feathers. Here are just a few.

Some have considered the hummingbird to be “magic” because of its speed and ability to appear and disappear so quickly. The ancient Mayan’s believed that the hummingbird was the “sun in disguise” that appears in a hummingbird form to court the moon. 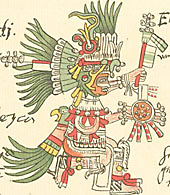 Huitzilopochtli, the most powerful Aztec god was thought to be half man, half bird. The Aztecs believed the god was made of hummingbird feathers that fell from the sky.

Today, some folks in Central and South America still believe in the mythical power of the hummingbird. The tiny creatures are dried and ground into magical powders. The powders are then used to attract money, power, or romance.

Although hummingbirds were, and still are today in some regions, considered to be mythical and magical there was a time in history when they became so popular and misused that thousands were being killed. Europeans were using their skins, feathers, and even their bodies in women’s fashion, to construct artificial flowers, and dust catchers.

Thanks goodness for the Migratory Bird Treaty Act of 1918! The treaty prohibited trade in any migratory bird species and their feathers. The treaty also helped to protect bird habitats.