What DO Hummingbirds See?

We’ve all seen plenty of red hummingbird feeders, but do you know why?

Hummingbirds see in near UV (ultra-violet), which is why colors such as bright red, pink, or orange stand out more easily to them. Many fruits, vegetables, flowers and seeds are brightly colored – they stand out to animals, such as hummingbirds, and insects more so than humans. Isn’t it amazing how our world of nature works? All of the things that animals and insects need to survive are set to stand out from green vegetation and earth tones found in the great outdoors.

UV rays, also known as chemical or heat rays are invisible to humans and go beyond the color violet. Seemingly so, the name ultraviolet means “beyond violet” (from the Latin word ultra, meaning “beyond”). “Beyond violet” color has the shortest wavelengths of visible light. UV rays have a color spectrum of electromagnetic waves with higher frequencies than those that humans can identify as the color violet. Black lights produce lights in the UV range. 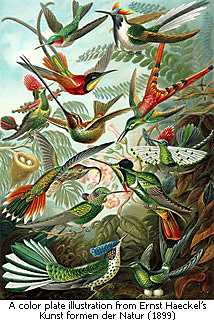 If you noticed, I didn’t say that hummingbirds see UV; I said they see “near” UV. The keyword here is “near.” Hummingbirds do see all other colors that humans see; it’s just that the colors mentioned above stand out more to them than others because of where they fall on the color spectrum. Don’t worry if you have a green, brown, or blue feeder - hummingbirds are extremely curious and wherever there is nectar they will find it!