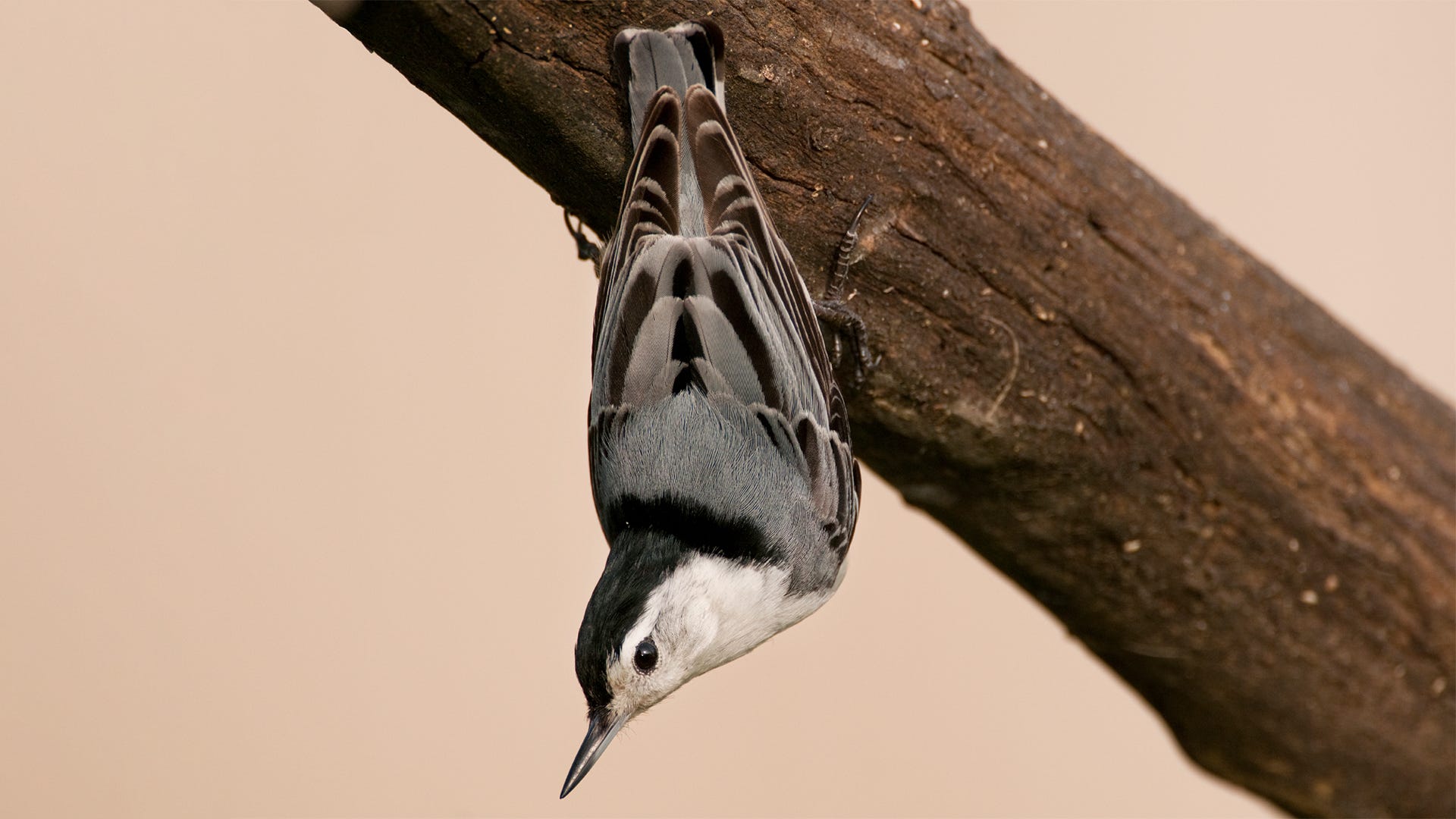 If you have a suet or box feeder in your backyard, then more than likely you recognize this distinctive gray, black and white bird. The White-breasted Nuthatch is common in North America and its nasally call can be heard all year long. These vocal birds can normally be spotted in monogamous pairs in wooded areas searching for food. 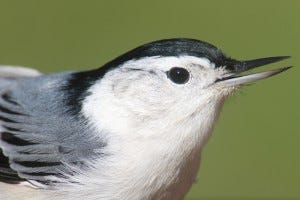 This specific variety of nuthatch can be found year round in the United States and parts of Canada, Mexico, and Central America. While the White-breasted population is said to be dwindling in the Southeastern United States, the species is growing globally with an estimated breeding population of 9.2 million.

Although it is recognized as a common feeder bird, during the summer in its natural habitat the White-breasted Nuthatch feeds on insects like beetles, ants, and caterpillars. Oftentimes during the winter, it joins flocks of chickadees or titmice to forage along tree trunks, limbs, and occasionally the ground for seeds. By joining together with a bigger flock, the Nuthatch is able to find food more easily and remain protected from predators.

Any feeder can be a nuthatch feeder. Why? Because feeders stocked with suet, peanut-butter, and large nuts, like sunflower seeds and peanuts, attract these birds to backyards all around North America. If a White-breasted is spotted making countless trips to a particular feeder consistently, it is likely that it may be transporting the seeds to be stored in the bark of a nearby tree. 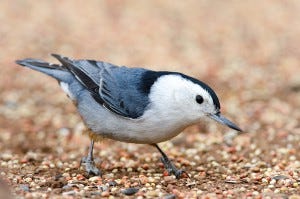 The largest of the Nuthatch family, the White-breasted typically averages between 5.1-5.5 inches in length. Its wingspan is longer than its body length ranging from 7.9 to 10.6 inches and the bird often weighs between 0.6 and 1.1 ounces. Its forceful beak and strong feet help the creature feed and forage along the bark of trees.

A male White-breasted can be easily spotted by its black crown and neck, contrasting white face and belly, and blue, black, gray and white wing markings. Typically, the female’s coloring appears more dull with a paler crown and a darker nape. The appearance of a female White-breasted Nuthatch may vary in different regions. For instance, in the Southeast, its head pattern and coloring may more closely resemble that of the male White-breasted. A White-breasted that has not yet reached full maturity often resembles the adult, but lacks the coloring definition on its wings and often appears more brownish gray in color.

This songbird is extremely vocal and is usually heard long before it can be sighted. A White-breasted Nuthatch call varies between subspecies, but its song is heard as a constant stream of repeated nasal whistles several seconds in length. The male’s song can be heard in the last few months of winter and throughout the spring. Its more rapid song is considered to be used to attract mates. The call of both the male and females maintain a trembling quality, referred to as a yank.

This particular species of nuthatch is often spotted in pairs or mates that often forage for food together. When traveling in pairs, while the male is scanning wooded areas for food, the female often acts as the “lookout” working to protect the male from predators. When foraging for insects and seeds, this songbird scales tree trunk and limbs up, down, and sideways chipping away at the bark and probing the surfaces for available food. The species even stores excess food in open crevices throughout their territory of the woods.

White-breasted Nuthatches are territorial creatures. Because they do not migrate, nuthatch pairs store food in, and defend, small wooded areas that they claim as their own. When their territory is threatened, this nuthatch will ruffle and raise its feathers and flick its wings to intimidate an invading bird.

Once a year, White-breasted Nuthatches lay between five and nine spotted eggs. While the female incubates the eggs, the male will bring her food. Exclusively, the females will build nests in a natural cavity of a tree or a woodpecker hole that is at least one foot off the ground. The female White-Breasted Nuthatch lines the vacant space with bark fiber, grass, and twigs for their offspring. Occasionally, the Nuthatch will line the nest with mud and crush an insect around the perimeter of the nest to repel predators.

The White-breasted Nuthatch is the perfect bird to observe in your very own backyard all year long. Its active, unique behavior and chipper calls make for an interesting and beautiful show!

Have you seen a White-breasted Nuthatch in your yard? Visit us on Facebook to share your pictures and stories. Also, be sure to sign up for our e-newsletter to receive exclusive updates on your favorite products as well as great birding articles right in your inbox.