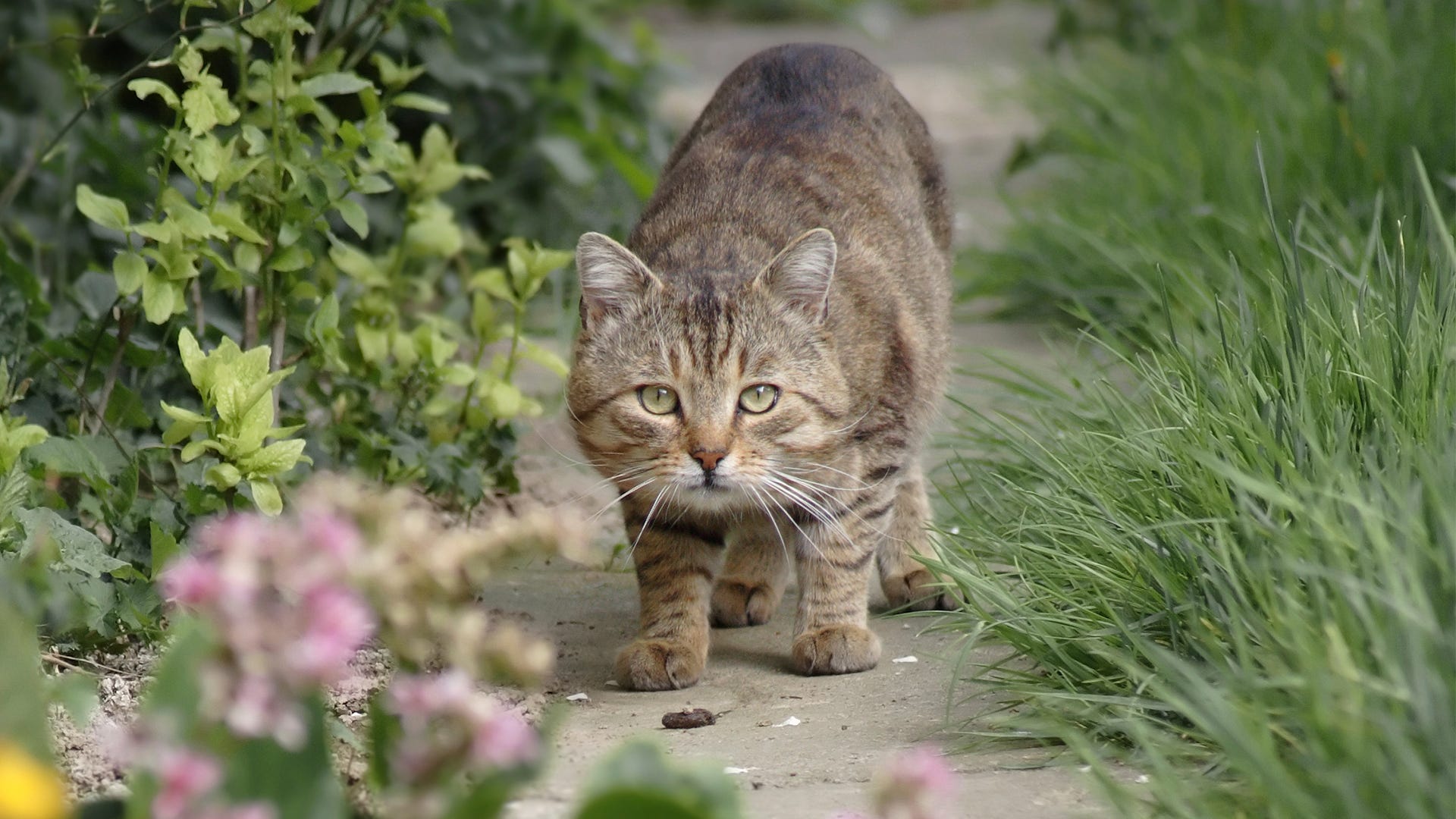 Every bird that stops by your bird feeders must remain vigilant during its visit. In fact, your feathered visitors check their surroundings for predators and prefer to feed at feeder with a wide viewing area. Even though birds have a keen sight, predators can be hiding close by, waiting to ambush. It’s an unfortunate truth, but the backyard birds you love are part of the predator-prey cycle.

Since bird feeders, bird houses and bird baths serve as a focus for bird activity, it should only be expected that predators also focus in on these areas.

There are measures you can take to give your feathered friends an advantage against predators. By following a few simple guidelines, limit the predator activity in your bird-friendly backyard. In this Wild Bird Predator Guide, the Wild Bird Journal will highlight some of the most common wild bird predators, from the obvious ones to the surprising, and offer a few suggestions on holding them at bay!

While they are playful and cute in your home, domestic cats are considered one of the most dangerous wild bird predators. Recent studies suggest domestic cats, which include your tame house cat, stray cats and feral cats, kill between 1.3 and 4 billion wild birds every year. Experts say this number is actually on the rise, and has sparked some heated debate between cat-lovers and birders.

What makes cats so skilled at catching birds? They are agile hunters adapted to hunt small prey. Cats can creep silently toward unsuspecting prey. When they’re close enough, they can swipe a songbird from the sky with their needle-like claws.

Discouraging unwanted felines from prowling near your backyard feeders can be accomplished by: 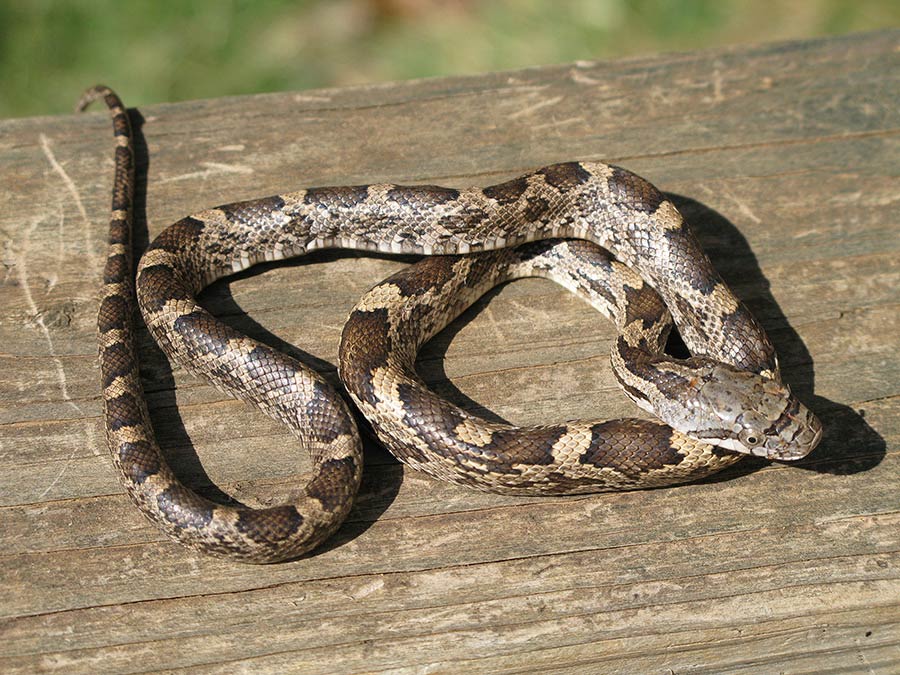 Many of us would be startled if we came across a snake slithering around our backyard bird habitats. But as carnivores, snakes often consume birds, their offspring and their eggs. Snakes are known for their ability to swallow prey whole by unhinging their jaws, which makes them capable of taking on prey that seems much too large.

More importantly, snakes are excellent climbers! Even without legs, they can coil their way up a pole or tree to strike at an unsuspecting bird. 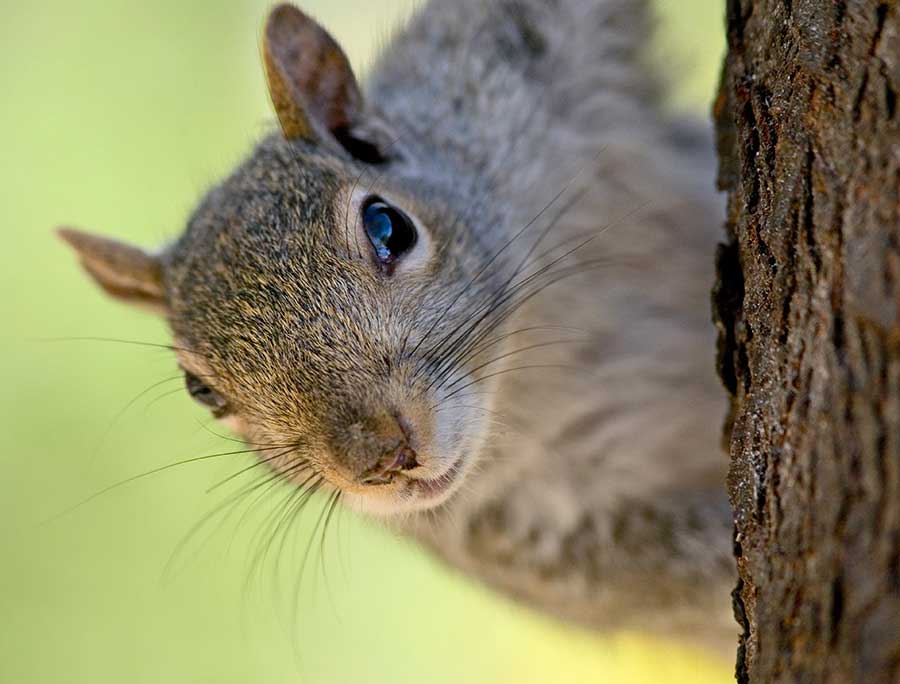 Squirrels have both frustrated and fascinated bird watchers for years. They are a delight to watch, of course, but they also eagerly raid bird feeders. Beyond that, there have been accounts of squirrels eating injured birds and their young. It also is not uncommon for Gray Squirrels to ransack a wild bird nest to feed on eggs.

For squirrels, it’s all about a good opportunity. They are experienced foragers that scale tree trunks and limbs, so it’s easy to find bird nests. Deter predator squirrels by: 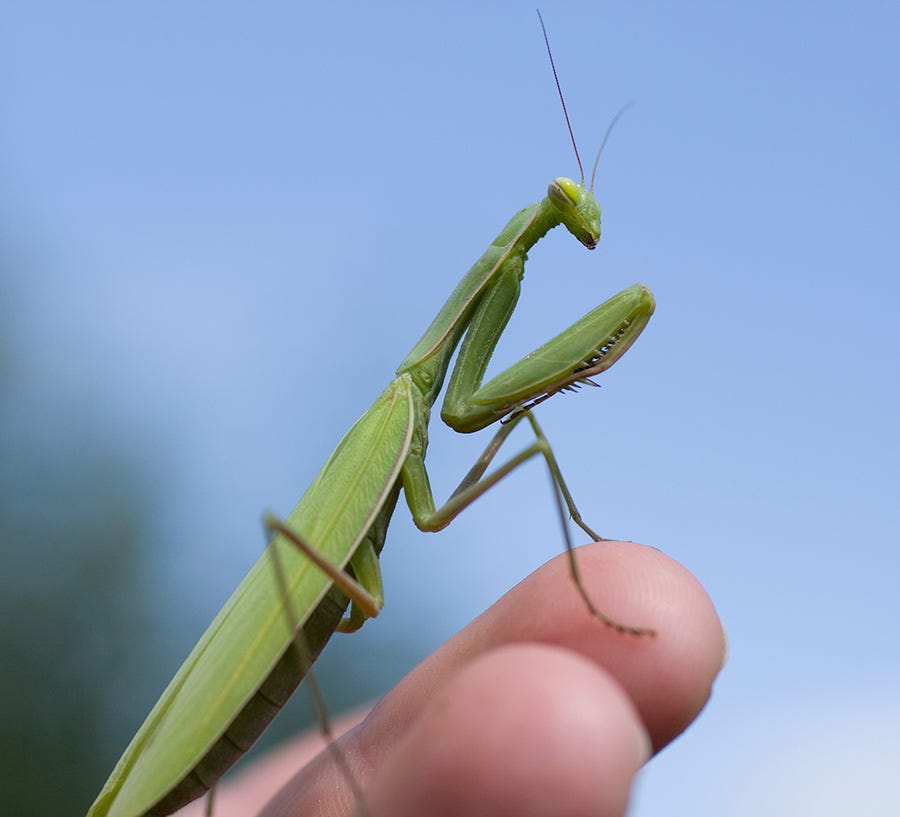 It’s hard to believe that any insect could take down a bird, but it happens. Praying Mantises, in particular, have been known to stalk and kill hummingbirds.

Other insects aren’t so obvious in their attacks on birds. Mites and other bird parasites can weaken a bird so severely that it will lose feathers and grow anemic. This energy drain leaves the bird susceptible to other illnesses and may die. To combat insect dangers to birds you can: 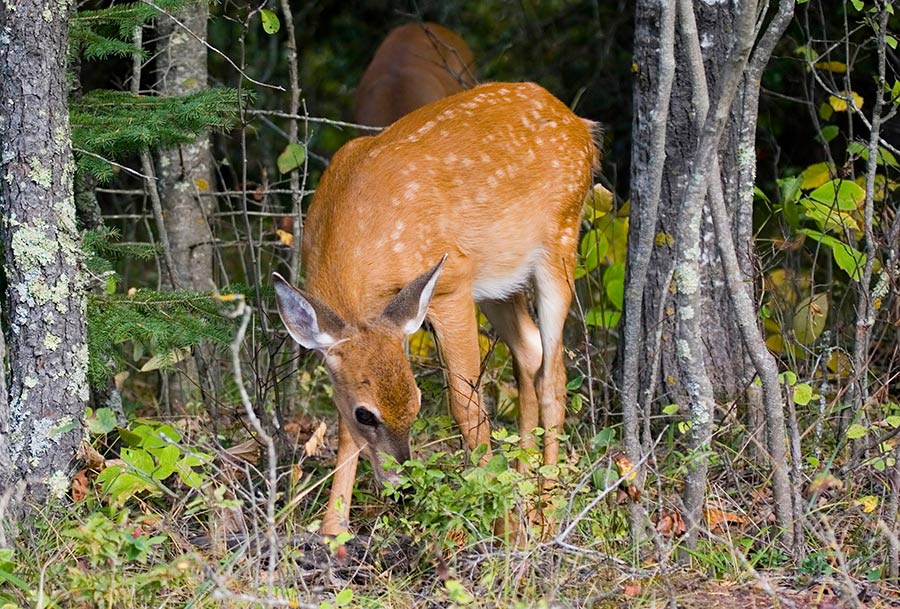 These normally docile herbivores are not as harmless as many nature lovers, and even biologists, thought. Recently, video footage of White-tailed Deer has surfaced that shows them feasting on wild bird chicks without a second thought!

Some scientists speculate that herbivores like the White-tailed Deer turn to eating meat when vegetation becomes scarce or when they suffer a nutrient deficiency. While it seems unlikely that deer frequently engage in this behavior, you can limit deer intrusions in your backyard habitat by: 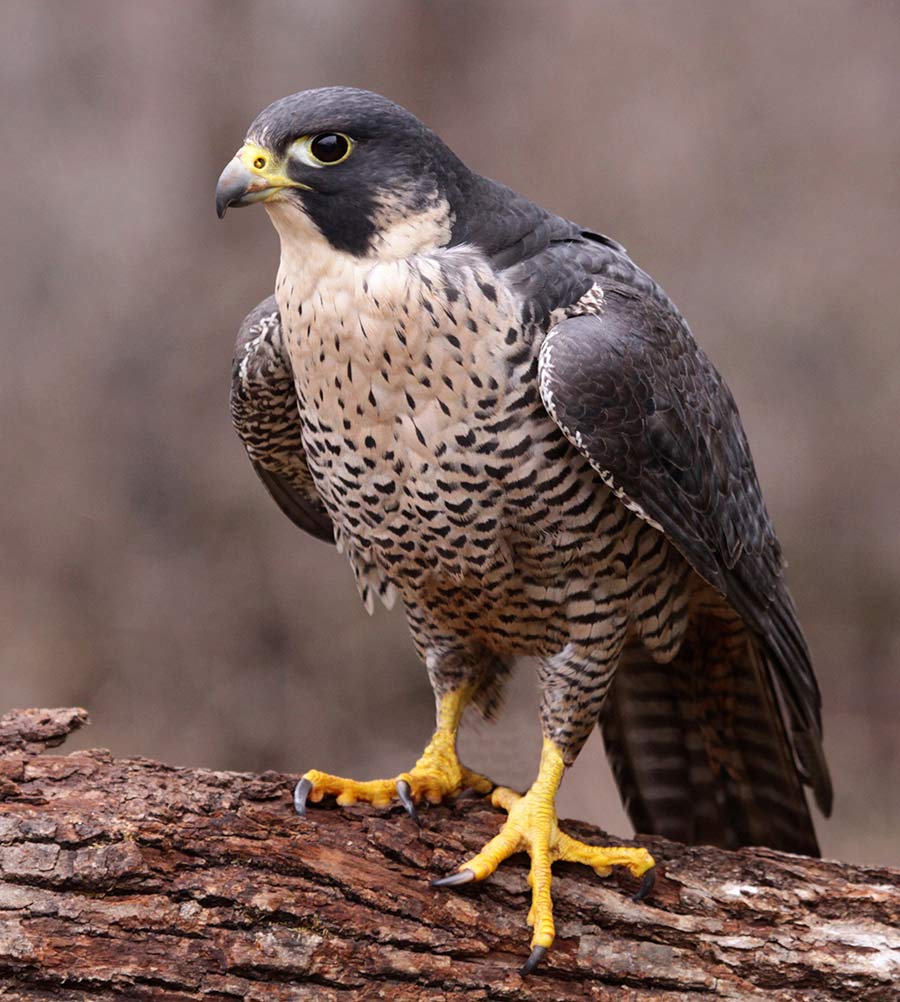 Large birds of prey, such as eagles, owls and hawks, may appear majestic in flight, but can ravage a population of wild birds. Raptors typically feed on small mammals and birds, including finches, sparrows and many songbirds. When hunting, some species of raptors are able to pluck a bird from the sky, attacking it in mid-flight!

The size of the bird often doesn’t matter, either. The Peregrine Falcon often focuses its hunting on birds and eats fairly large ones, including pigeons, doves, ducks and grouse. For more on another raptor, check out our Species Spotlight on Red-tailed Hawks.

While the largest birds of prey rarely hunt in backyards, some hawks can be found ransacking wild bird suet feeders and diving after backyard songbirds.

When these raptors do prey on smaller bird species, they typically feed on the older and weaker birds. Ornithologists say that this practice actually improves the strength of the smaller bird species. You can limit the effectiveness of birds of prey by: 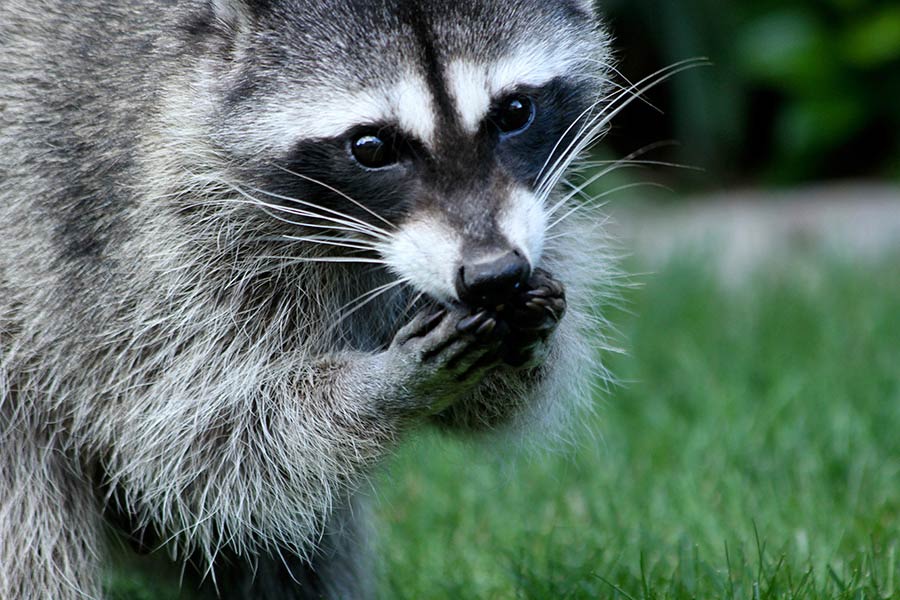 Don’t let a raccoon’s adorable face fool you. These pesky little bandits are infamous for raiding nests and eating bird eggs. A raccoon’s diet is far from particular — it will eat pretty much anything. Because they usually live in tree cavities, bird nests are easy for raccoons to find. Aside from eating bird eggs, raccoons will also eat bird seed straight out of feeders.

We hope this Wild Bird Predator Guide will help you understand the threats to the birds that frequent your backyard. Making your space bird friendly is our ultimate goal!