Appearance of the Spatuletail Hummingbird 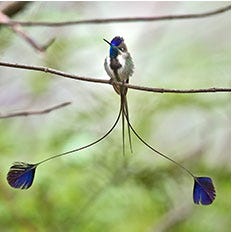 The Marvelous Spatuletail Hummingbird is a medium-sized hummingbird ranging from 10-15 centimeters in length, including its tail. While the body itself is fairly small, the long beak and impressive tail add to its overall size. This beautiful little hummingbird has mostly white, green, and bronze plumage with a vivid violet-blue crown of feathers, and an iridescent turquoise gorget.

What really distinguishes this hummingbird is the tail. Males of this species have only four tail feathers, two of which are long, racquet-shaped outer feathers. These feather crisscross and culminate in large discs, also known as spatules, which are the same color as their crown. These tail feathers can be moved independently, which they do as part of their mating ritual. These feathers can grow to be up to four times larger than the rest of the hummingbird’s body.

Females lack the colorful gorget, crown, and black midline of their male counterparts, as in most hummingbird species. They also have much shorter tail feathers, featuring drop-shaped spatules at the end. Juveniles are similar in appearance to female Spatuletail Hummingbirds, but do not have spatules on their tails.

The Marvelous Spatuletail Hummingbird is found in northern Peru in Utcubamba Valley. They have an extremely limited range of only 110 square kilometers.

The Marvelous Spatuletail is typically found along the border of forests as well as isolated woodlots, and steep valleys and gorges. They prefer second growth and montane scrub like thorny, impenetrable Rubus thickets mixed with some Alnus trees.

Sadly, this species of hummingbird is endangered, according to the International Compilation of The World’s Rare and Threatened Wildlife red list (IUCN). Habitat destruction is the major contributing factor of the Spatuletail’s decline. Their habitat is dwindling as forests are burned for agriculture and trees are cut down illegally. The American Bird Conservancy (ABC) has noted how there is a major lack of land preservation in this region of Peru and they are trying to improve it.

Another threat to this species is illegal hunting. Locals have been known to hunt down the birds for their magnificent tail feathers. Some also believe that the Spatuletail Hummingbird’s heart is an aphrodisiac. Children also play games shooting them down with slingshots. Because of these hunting activities, the ratio of male Spatuletail Hummingbirds compared to females and juveniles is very unbalanced. Some reports say males may be outnumbered by more than 5 to 1.