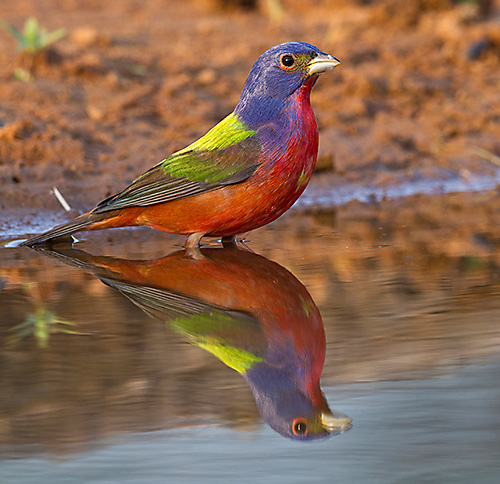 Appearance of the Painted Bunting

The male Painted Bunting is a veritable box of crayons when it comes to its plumage. It has a bright blue head, orange eye ring and a red breast and belly. Its back is green and its wings seem to mix purples, greens and blues.

Female and juvenile Painted Buntings are attractive in their own right – a solid emerald green. This color helps them hide in vegetation while incubating eggs or learning to fly.

The Painted Bunting’s attractive plumage is also its greatest fault. These beauties are in high demand for the wild-caught pet trade. Further compounding their decline is just how easy it is to capture a live bird – males are intensely territorial, so a decoy positioned in a trap can quickly draw a live bird eager to show his dominance.

Trapping of these birds is illegal in most countries, but that doesn’t stop most poachers, particularly those in Mexico, the Caribbean and Central America, where the birds spend their winters.

Both male and female Painted Buntings measure about five inches long, which make them slightly smaller than most bluebirds.

Though these birds have remarkable coloration, their song is far less distinctive. Their song is a series of short, high-pitched notes. Other vocalizations include a simple, repetitive “plick” sound.

Geography of the Painted Bunting

Painted Buntings spend their summers in the United States and Mexico. Their summer range is mostly in the U.S., with only a portion of Northern Mexico near Texas included. States where they regularly appear are Alabama, Arkansas, Florida, Georgia, Kansas, Louisiana, Missouri, Mississippi, North Carolina, Oklahoma, South Carolina and Texas.

Winter migration takes them deep into Mexico and Central America. Some also winter in the Caribbean, namely Cuba. Their migration also includes a mid-trip feather molt. They often stop halfway in Mexico to complete that molt before moving on to their final winter range.

Local Environments of the Painted Bunting

Painted Buntings prefer a scrub-brush habitat, which means they’re far more likely to appear at feeders in rural areas. These semi-open habitats feature a mix of trees, scattered shrubs and weed patches, a habitat most people see as untamed and unsightly. These areas are commonly referred to as "scrublands".

In Texas and Mexico, scrublands are fairly common, but further east many of those habitats have disappeared. The Painted Bunting population outside of scrubland territory has adapted to variety of habitats that may feature some elements of their native scrublands. Among them are wooded dunes, palmetto thickets, fallow farm fields and, occasionally, yards with plenty of shrubs.